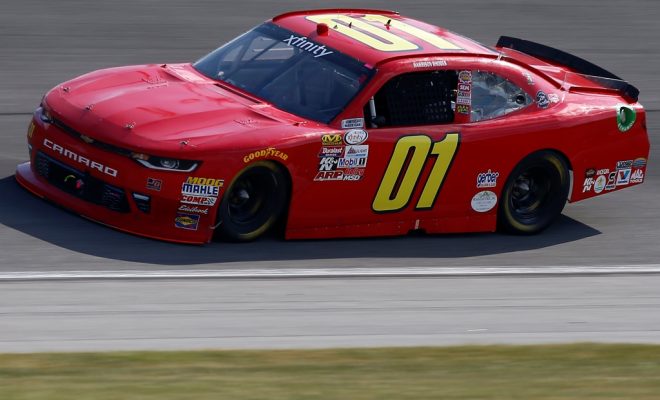 Popular Speed recently caught up with the JD Motorsports driver to get his thoughts entering the year.

POPULAR SPEED: What are your thoughts entering the year?

VINNIE MILLER: Well, I’m happy to be running a full-season again. This will be my first time running a full season since 2014, 2015. So I’m excited to contend for rookie of the year, and hopefully get into the playoffs, and I am actually heading up to the shop right now as I speak. They’re a good group of guys; I think it will be a strong team this year. We have a couple good drivers on the team, and the crew guys are working hard to get everything ready for Daytona, so I think we’ll have a strong start to the year.

PS: What does it mean to you get the opportunity?

VM: Ever since I started racing when I was five, I always wanted to be a NASCAR driver. So to be in the NASCAR XFINITY Series and driving against some of the best with the NASCAR name, I just can’t believe it’s happening. It means the world.

PS: What are your goals and expectations?

VM: I would like to get rookie of the year, make the playoffs, and I think we can run top-20, top-15 every week. That’s my goals for the year, and my team’s goals, too. Hope we get a couple top-10’s in there.

PS: What track are you most looking forward to?

VM: Probably between Bristol and Michigan. Michigan is my home track, and I did really good there in the ARCA car. Then Bristol, I raced there last year and that place is just really fun – just fast, pure adrenaline, and everything; you have to be focused 100% every time you’re in a car there.

PS: What were you able to learn from the limited experience last year?

VM: I would say probably that one, it’s nice to race with all the XFINITY Series drivers because they have a ton of experience racing cars, and they’ve come up in it just like me. So when you get to that level, just racing a lot of veteran racers, you still have to be on your toes, but everybody knows a lot more what they’re doing so you don’t have to worry about people making dumb decisions and causing wrecks. So that’s a little bit at ease.

Also, they’re a little bit tougher to drive than say an ARCA car, or a late model, because they’re heavier and have almost no downforce on them due to the spoiler change last year. So that’s something to be noted, too.

PS: How did you initially get involved in racing?

VM: When I was four and a half, my grandfather got me into it. He was always a big fan of it, but never had the money to do it himself as a kid. So he got me into it when I was four and a half, and built me a quarter midget. He came to school, picked me up, and we went to the local quarter midget track, and I just started practicing. When I was five, I started racing – I want to say 2002 was my first year – and I’ve been racing ever since. I came up through quarter midgets, was really successful in those, and then moved in stock cars at my local track. I toured around Michigan a little bit, racing street stock and late models up there.

When I was 17, right after I graduated high school – I think the following week, I moved down to North Carolina and started racing super late models with a couple different teams.

PS: What’s your most memorable career moment to date?

VM: Probably my seventh-place finish in my first time in a truck at Talladega Superspeedway. I would have to go between that, and leading 40 laps in an ARCA car at Michigan. That was kind of my first taste of doing good in big time auto racing.

The thoughts and opinions expressed here are those of the author and do not necessarily reflect those of PopularSpeed.com, its owners, management or other contributors. Any links contained in this article should not be considered an endorsement