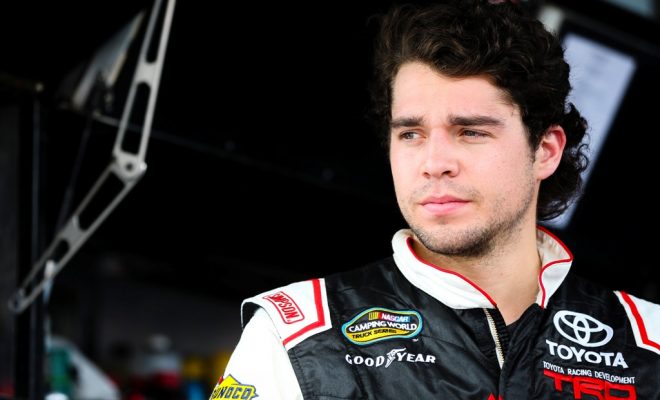 The Active Pest Control 200 at Atlanta Motor Speedway generated a lot of headlines for the NASCAR Camping World Truck Series. One of those was the impressive eighth-place finish by Jesse Little.

Ready for a limited schedule this year consisting of a minimum of eight events, the 20-year-old shared his thoughts on the performance, as well as his outlook moving forward.

POPULAR SPEED: To start off the year, you’re off to a good start….

JESSE LITTLE: We were happy about how we ran at Atlanta. We wanted to go there and have a good solid run, and we believed that would’ve been a top-10. To go there and get into the top-five with 10, 12 to go, that was pretty impressive and good for us. It was a good confidence booster and gave us the knowledge to know we’ll be competitive this year, and maybe have a shot to win a race.

PS: What’s it like being a single truck team going against the multi-truck organizations?

JESSE: It’s fun, to be honest. It’s frustrating at times, but to beat them is rewarding and you feel you’ve accomplished something. You know, we work really hard and we do our due diligence before we go to the track and compete as much as we can as best as we can. To go there with the small group and people behind us and compete against some of the best, that’s what it so special and rewarding.

PS: You’ve got a nice schedule moving forward. Looking at the races you’re going to run, what track are you most excited to get to?

JESSE: Honestly, Dover our next one. I feel that’s a track that suits me better than anyplace. I’ve always been really good there. We’re taking a truck there that’s going to do really well. I think we should have our best shot to win a race here, but other than that, I’m excited to get to all of them. I feel like I can be good no matter where I am.

PS: What are your goals for this year?

JESSE: Right now, a good goal is to be competitive, whether that’s running in the top-five every race, or showing the viewers and other drivers that we can run up front. I think a good realistic goal is to get a top-five finish. I’ve had some top-10s now, and I just want to go out each week and be competitive and execute.

PS: How close are you to running the full schedule?

JESSE: We’re getting closer with the introduction of the NT1; that helped us quite a bit. However, it’s still really difficult for a team like us to do it without a lot of funding and sponsorship. So we’re constantly seeking as much help as we can from outside companies. But other than that, we are starting to get the infrastructure and resources in place to make it happen. We just need the funding to do it now.

JESSE: I think obviously I would have to say a little bit of my dad, but growing up watching, Tony Stewart was one for me. I enjoyed him more so than a lot of guys growing up when I was younger.

PS: Touching a little off-track, letting the fans to get to know you. What’s your favorite food?

JESSE: I like a good bacon cheeseburger for me, or a nice medium rare steak.

PS: On the flip side, what’s your least favorite food?

JESSE: I enjoy everything, but something that I don’t really care for is probably green beans.

PS: If you were stuck on an island, what are three things you must have?

JESSE: A good book, matches, and an ax. I figure with that I can take care of that. Actually, maybe a fishing pole instead of a book.

The thoughts and opinions expressed here are those of the author and do not necessarily reflect those of PopularSpeed.com, its owners, management or other contributors. Any links contained in this article should not be considered an endorsement