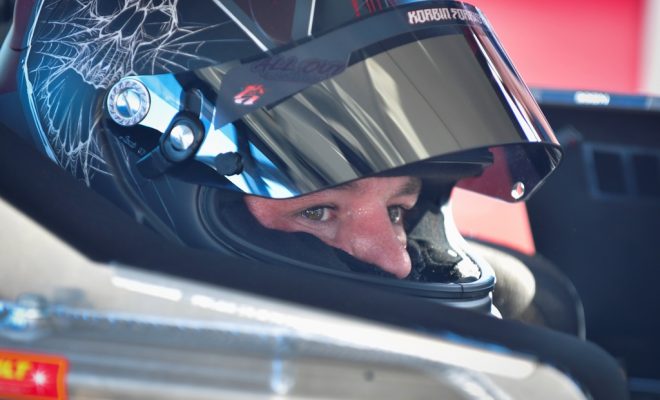 Entering the North Carolina Education Lottery 200, Korbin Forrister was full of excitement with having a new sponsor on his truck.

The No. 7 Toyota Tundra was set to feature the N.O.W. (Needs Over Wants) Matters More Foundation, which focuses towards coming up with creative efforts and solutions for prevention, education, and treatment of substance abuse and the disease of addiction.

Unfortunately, qualifying being rained out and set by the owner’s points standings has resulted in Forrister missing the show. Before the weekend began, though, the All Out Motorsports driver shared his thoughts with POPULAR SPEED, which can be seen in their full entirety.

POPULAR SPEED: What’s one of the biggest challenges of Charlotte Motor Speedway?

KORBIN FORRISTER: It’s just a really, tough, high-banked fast track. It’s a little rough, not as smooth as it used to, but it’s gotten better over the years, but it’s still one of the toughest tracks on the circuit in my opinion.

PS: How would you characterize your season so far?

KB: We’ve built a new team and it’s all coming together and we’re getting better as a team. I feel like we’re still struggling in some aspects, but every time you start something new, it’s a little rough at the start. We’re growing with each race, and I feel like it’s just coming together slowly.

PS: Having your parents own the team and their support, what does that mean to you?

KB: It means a lot. They know what makes me happy and they know I can be successful at it, so they stand behind me, which makes me very thankful for everything they’ve done for me and believe in me.

PS: Beyond Charlotte, what track are you most excited to get to?

KB: Probably Eldora. The only dirt track on the circuit, and that’s where my roots are. I come from dirt racing so it’s nice to get back out and do that stuff again.

KB: I started in go-karts on dirt and we really successful at that. We moved into full body cars, and had some success there. Then ventured over to asphalt and was pretty good at that, and we just grow every year and get better every year.

PS: What’s been your most memorable racing moment to date?

KB: Probably a young age when I won my first track championship, winning 12 or 14 straight races that season. We pretty much dominated, and that was a fun year for me. That was a really good year. Everything worked out. We were really fast all year long.

KB: I would probably say Jimmie Johnson – him and Tony Stewart. Jimmie has won a lot of races and a lot of championships, and Tony Stewart – you know he’s really good. He can race anything with wheels on it and be fast and win in it. I like both of those guys, look up to them both.