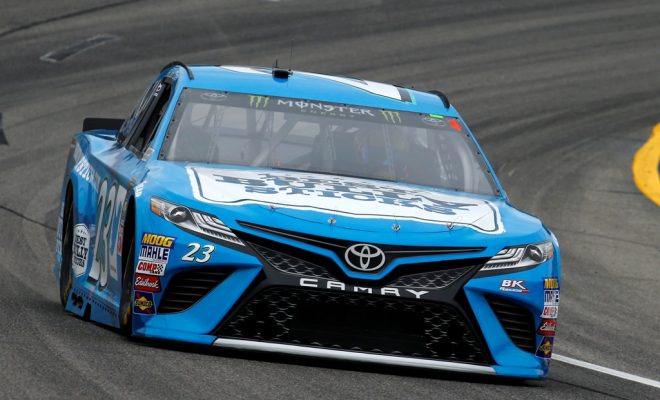 POPULAR SPEED: What are your thoughts going into Richmond?

ALON DAY: It’s the top level of motorsports so obviously I’m super excited. I think the opportunity that Best Bully Sticks gave me to drive at the Cup level is something that I’m really thankful for. I think it’s a unique combination as they’re a new sponsor. Both of us are upcoming brands. I’m trying to make my way into NASCAR and making my way up, and they’re trying to make their way up. I’m super excited, looking forward, and hoping for the best.

PS: What are your goals for the weekend?

ALON: Well first of all, I know what equipment I am driving. I’m not looking for any goals as far as top-20, top-30. I’m trying to be approved by NASCAR to drive at bigger tracks. Richmond is the first step, so I’m trying to run as much as possible. I know it’ll be challenging as I’m a road course specialist – I’m not an oval guy. I want to learn as much as possible, not many any mistakes, and stay out of trouble, and make Best Bully Sticks proud of me.

PS: What does it mean to have Best Bully Sticks’ support in being their first race as a NASCAR sponsor?

ALON: I think it’s pretty special. As a dog lover myself, I’ve had dogs my whole life, and as I told you before about upcoming brands, both of us are. I think that’s a wonderful combination that both of us are looking to move up in this world. I think this is special, especially for driving the car with the Best Bully Sticks. The car is going to be totally blue and cool, and just a cool opportunity.

I’m super thankful for them and realizing the potential I have in driving for them. All I can say is thank you to them and I hope they’ll be proud after the race.

PS: What’s the biggest thing that you’ve learned from your previous NASCAR top-three premiere series starts that you feel will help you this weekend?

ALON: I’m coming from Europe, and usually contact is something that is not very common – like touching and rubbing. I think the biggest I learned in the States, especially in my XFINITY debut at Mid-Ohio in 2016, is how aggressive the drivers are. I had to learn very quickly to deal with that. I wasn’t ready for contact and people started bumping me, rubbing, and pushing me out. I think that’s the biggest thing I’ve learned is how tough it is with this competition.

I think it’ll help me this weekend as it’s a playoff race, and obviously I’m not going to get in the way of one of those guys. I know it won’t be easy; it’s going to be tough. This is the top level of racing. I’m ready for it.

PS: We’ve seen you slowly making more starts. Is there anything in the cards for the rest of this year and 2019 to keep this progression going?

ALON: Well first of all, I’m still racing in Europe in the NASCAR European Championship, and as far as 2018, I want to win the championship next month in the last race and to gain more experience. That’s why I’m driving an XFINITY, and trying to get approved for 1.5-mile tracks for 2019. The main goal is obviously to find a full-time ride, and yes, make it to one of those championships. I don’t care whether it’s truck, Cup, or XFINITY; I just want a full-time ride here in the States and to race in NASCAR.

ALON: It’s very hard for me to say. I grew up racing Formula 1, which is totally different, and my racing hero is Ayrton Senna. I don’t have any single heroes; I’m just trying to get the best out of every other athlete, not just in motorsports, and trying to learn as much as possible.

ALON: I was like 10 years old. We didn’t have any kind of motorsports back in 2002. All we had is go-karts and I’m very fortunate my parents understood the situation and sent me to Europe to build my career over there. I started when I was 10 years old from go-karts, and then it wasn’t easy.

Being from Israel, just try to imagine that people in Israel didn’t even know about motorsports, NASCAR, or Formula 1. When you try to attract sponsors, it’s impossible because they don’t have the knowledge. Here, you go to companies and they know what NASCAR means, but there, it was almost impossible. As I said, I’m fortunate my parents realized it and put a lot of money and energy into it, and I am where I am right now due to them.

PS: What advice would you to someone who is coming up through the ranks?

ALON: I think from my own personal experience is practicing patience. Many times I felt like it wasn’t going to happen, and I was going to stop because I didn’t have the money or sponsorship to keep racing. I realized that it’s all about patience, focused as much as you can, and not being distracted by other people and things they say. Eventually, it will come, and that’s my best advice. That’s even true this year. I was looking for a sponsor the whole year and suddenly Best Bully Sticks came up with an opportunity. As I said, it’s all about patience.