Ross Chastain has been on a hot streak recently in the NASCAR Xfinity Series, as he enters the Pennzoil 150 at the Brickyard on the heels of three straight podium finishes.

Though before practice on Friday, the Kaulig Racing driver took some time to answer some questions for POPULAR SPEED.

POPULAR SPEED: What are your thoughts going into this weekend’s race on the Indianapolis road course?

PS: What are your thoughts on how the season has gone thus far? 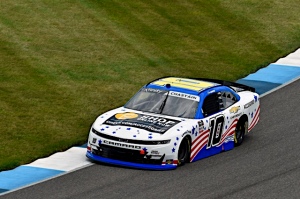 ROSS: I would say as planned, minus the wins; definitely the hardest spot, and the last spot that we need to check as a group is the wins. We’re putting ourselves in position, running inside the top-five in different points throughout the race, but over the last month, we’ve been able to finish there. That was our struggle for a little awhile.

It’s definitely been a work in progress, but we knew that. Running two full-time teams with a third-part time for Kaulig Racing is a big step, so I would say we’re on par.

PS: Over the past couple months, we’ve really seen Kaulig Racing really step up their game. What do you feel has been the big difference lately that has really seen you guys turn that corner?

ROSS: Just work in the shop. A couple years with the team being together – the 11 group has been together since the start of Kaulig Racing since the team came into the sport. The same group has worked on the 11, adding in extra group and my crew chief Bruce has been key. Just time and energy, and hard work.

PS: Now moving forward, what do you feel you need to continue to do to get better?

ROSS: The same thing we’ve been doing, stick to our plan. We lay out plans each week, each month for races coming up and it’s about sticking to our plan, I think. It’s easy to get freaked out – I do it, I get worried that our plan is too aggressive or not aggressive enough. Staying on our plan, I think it’ll work out.

PS: Beyond this weekend’s race at Indianapolis, what track are you most looking forward to getting to?

ROSS: Well, to be honest, I was looking forward to Pocono. So beyond that, all of them really. I think we can go anywhere. We’ve proven that we have speed at all these places, so I don’t have one particular. Pocono was high on the list, but we came up a little short. So we’ll just keep plugging.

PS: It’s got to be odd lately racing without the fans at the track….

ROSS: It definitely is – yes, for sure. it probably gets the most strange after the race and we’re debriefing with our groups and it’s silent. Usually the winner is interacting with the fans, whether I win or not; we lose a lot more than we win. But yeah, it’s definitely silent after the race.

Pre-race, we’re all so focused – or I am – I’ll probably notice it a lot more when they open it back up an fans are allowed in the garage because you’ll be signing autographs as you’re walking to places and we don’t have that now; we don’t see anybody.

PS: You’ve had one of the more interesting routes to get to where you are now in the sport. If there was one thing you could change, what would that be?

PS: So with that in mind and the path you’ve taken and experience gained, what’s one piece of advice you’d offer to the next racer out there?

ROSS: Just keep fighting, just keep plugging and take every opportunity. We’ve kind of made it into a tagline but try to be the busiest guy. I try to be in as many racecars in one weekend as I can, and that’s key for me to get reps, get laps, and work with different people. They’re not all going to be good; they’re not all going to win every race, but just emerge in as many situations as possible.

PS: And lastly, I have to ask this because it is one of the most unique celebrates in NASCAR. When you do get to victory lane this year, will we see a watermelon smash?

ROSS: Absolutely. We carry them every week, we’ve carried them for years, and we’ve eaten a lot of them in sorrow after we’ve lost, but yes, we’ll keep smashing them. We want to promote farming and watermelons in particular so yep, definitely see the watermelon hopefully this year.