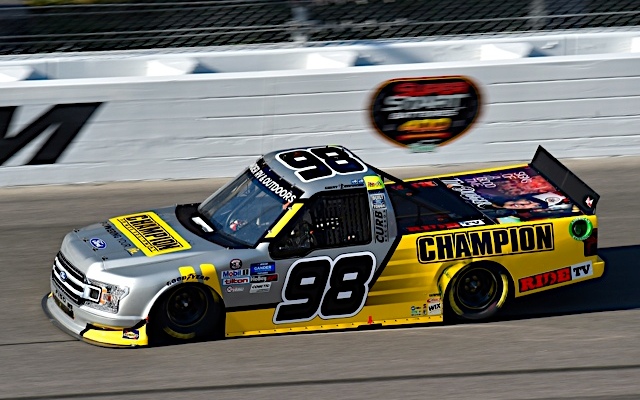 Grant Enfinger is in the midst of a solid NASCAR Gander RV & Outdoor Truck Series season, which continued on Friday at Kansas Speedway with a third-place finish. It certainly helps offer more confidence as the series’ tackles their first ever double header, with another 200 mile affair scheduled for Saturday.

“I’m actually looking forward to staying a couple hours with the guys and turning this stuff around,” he said. “It’s kind of like the ‘ol school days when you’d run Pennscola and then Mobile. I was pumped up for it when I saw it on the schedule. I like that we’re here at Kansas. Even though track position matters and you  want that clean air, you can run any lane that you want to so if you have a good truck, you can overcome it. I’m definitely looking forward to battling the heat tomorrow.”

Already with just one race under their belts, some drivers visited the infield care center as a result of dehydration and heat exhaustion. For Enfinger, preparing for these events in the sunny 90-degree weather involves working out in the sun.

“I did a lot of running there in the heat,” he told POPULAR SPEED. “Just anything that you can do to expose yourself to those temperatures, I try to do and then a couple days before the race, I take it easy there and try not to spend too much time in the AC but not go crazy. Been drinking a lot of water and peeing a lot.”

Feeling good about his own conditioning, it’s now about getting his ThorSport Racing Ford F-150 to his liking, after having fought a balance issue throughout Friday’s event.

“We were a little tight, especially in the dirty air, which makes it much more worse,” he explained. “Even though it’s going to be hotter and slicker tomorrow, I’m going to lean on (Jeff) Hensley tonight and try to maybe trim it out a little bit for tomorrow. It’s like you want all the downforce you can stand, but you want that momentum to carry to get past somebody. So we’re going to have to talk long and hard about that, but I felt we learned a lot tonight.

“I feel like our adjustments came to us. We adjusted our F-150 well to us. The track did gain grip when the sun went down behind the grandstands there, the track did gain some trip, so that should tell you tomorrow the track should lose a lot of grip. It’s going to be 95 degrees tomorrow when we take the green flag so it should be hot and slick, so we should have our hands full and have a good time.”

Starting from the 13th position as a result of the invert, his ability to make passes, specifically on the restart, will be critical to be having success. Knowing how important track position is, he notes you have to be aggressive when everyone is close together.

“You have to be aggressive,” he said. “You have to make stuff happen because once you get buried in the pack, if you get shuffled back to 10th, chances are unless you’re just incredibly faster than the field, you’re not going to make it back up there. So you got to go for it. It’s just part of this package that we’re running with.