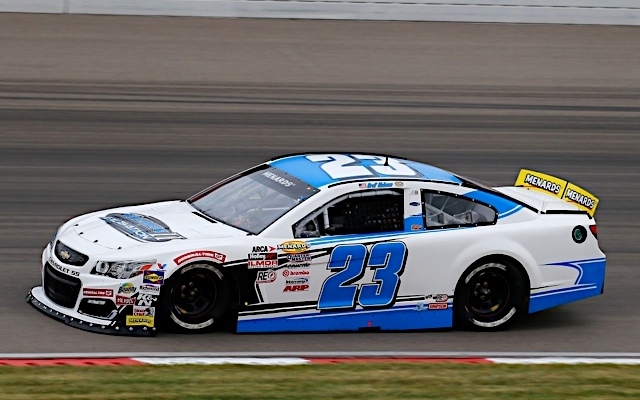 After working hard each year, everything came together for Bret Holmes and his own race team to win the 2020 ARCA Menards Series Championship. With having sometime to reflect on the accomplishment, the Alabama native shared his thoughts with POPULAR SPEED.

POPULAR SPEED: What does it mean to you to be this year’s ARCA Menards Series Champion?

BRET HOLMES: Obviously, it means the world to me. It’s the biggest thing that I’ve accomplished in my life and in racing, and we’ve been in this series for awhile now, so for us to build our team and to get to this point, it’s very special. I definitely won’t forget it, that’s for sure.

PS: Being one of the small teams in the series like you mentioned, what’s it like going up against the big organizations like Venturini (Motorsports) and (Joe) Gibbs (Racing)?

BRET: It’s a little intimidating for sure. They’re teams that defiantly have all their stuff together, and are really organized and have a lot of support and have been doing this a long time. It’s definitely mentally in a way intimidating. All you can do is keep working and keep improving on your cars and keep chasing the goal to get to where they are at. But not just those guys, but it seems like GMS (Racing) and Chad Bryant (Racing), too.

But those guys are great, too. They’re very respectful and willing to help you with what you need and that’s always a positive thing, too.

PS: What would you say was the most memorable moment from the year?

BRET: I think winning at Kansas earlier in the year in the summer. I think that race really showed we were on the same level of some of those other teams and we finally got my first win; it was the team’s second win, I think. I think that was a defining moment from the year that said we were going to win the championship and we’re just as good as anybody else as we can do it, and that’s what ultimately happened.

BRET: I think obviously as racers, you want to improve or move up the ladder when you’ve accomplished something; you either want to prove to people that you can do it again, or you want to move up. We have aspirations to move up. We still have a lot to prove in the ARCA Series and we will run some and that, but I think with the team and the guys that we have with Shane (Huffman), I think we’re capable of moving up.

PS: Looking at the races that you’ll possibly run in ARCA, even though you won the championship, what do you feel you and the team could improve upon?

BRET: We’re really close to being the very best team. I think we just need figure out how to get more help, as far as getting sponsors and getting a manufacture deal locked in. Those are a couple things I see that we really lack compared to the other teams that could really help us. But not only that, but the support in general will really give us better cars to be faster and work on the areas that we feel we need to work on. I think in the end, that’s what it comes down to be even better.

BRET: So my dad actually started in dirt late models in his 20’s and I came into the picture somewhere in that time period and grew up watching him race, mainly at Talladega short track. One day, I said I wanted to race and started me out in go-karts around six to eight years old, somewhere in there. I did that for about four years, and then moved into dirt late models.

That’s when I decided I wanted to do this as a career and chase a dream, and moved into asphalt late models shortly thereafter and ARCA after that so here we are.

PS: A lot of focus has been put towards the NASCAR event at Bristol, but let’s face it – ARCA has done this for awhile now. What’s the biggest challenge that comes with it?

BRET: Those cars aren’t built to be on race tracks like that. It’s fun, I think it’s a really fun race to drive, and I think that’s what makes it fun – those cars aren’t used to that style of racing. They’re bigger, they’re heavier, so obviously we can’t get it sideways as the dirt guys can. It’s fun. That’s what I miss a lot about dirt racing – the atmosphere, chasing the race track, and a whole different driving style.

Bristol will be a whole different animal compared to the dirt tracks that ARCA goes to, as obviously the tracks we go to are flat. Bristol is going to be a madhouse; I think it will be a fun race to watch, and hopefully we’ll be a part of it someday.

PS: Looking at your career and the road you’ve taken to this point, what’s one piece of advice you’d offer to someone who’s looking to get to this point?

BRET: Obviously, I’m very blessed to be in the position that I am with my family and they support me a lot in racing, so I haven’t had to go through a lot of those things that a lot of people go through. I respect those guys that do it without paying for themselves to race, but I think the thing I would say to keep pushing, keep trying, and never give up. That’s exactly what we did and three, four years later, we finally got what we wanted. So that would be the best advice that I can give.