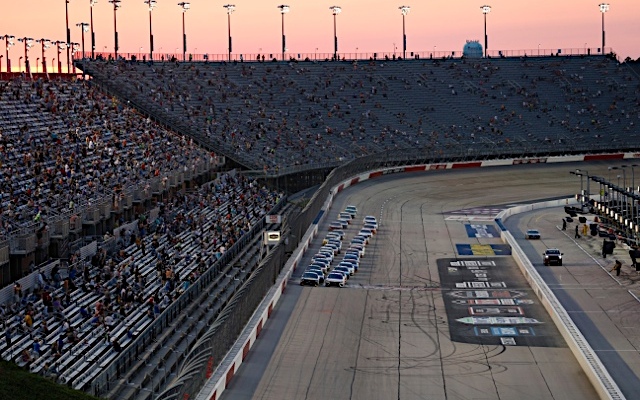 Another year of NASCAR Cup Series competition is in the books, with a new series champion as Chase Elliott hoisted the crown for the first time. Along the way, though, there were some highlights and low lights to consider from the action on-track all year.

Although I was unable to watch all of the races, let’s take a look back at the good and the bad.

GOOD: When you’re talking about the newly crowned champion, you could also say Elliott has become the king of the road, and that shined through on the Charlotte Motor Speedway ROVAL.

He found his way to the front, stretching out a couple second advantage over the field to give himself a clear path to victory. While watching him win is no surprise, but the adversity faced along the way was also a repeat of 2019 as he had to work for the victory, driving through the field after having a left front loose after pitting.

BAD: Even though he was the eventual champion and crowned at year’s end, the Hendrick Motorsports team knows they have places to improve to be stronger in 2021 and make their road easier. The aforementioned pit crew issues top the list, even with them looking like heroes at Martinsville Speedway, along with a rough summer stretch. There was also some miscues by crew chief Alan Gustafson at times in regards to strategy, as evident with a couple mid-pack finishes.

BAD: Darlington Raceway was also a rough patch for the No. 9 team, but not for their own fault. Elliott had one of the quickest cars there on two occasions, but found his route to victory lane blocked by contact.

The contact between Kyle Busch and Elliott can be chalked up to close racing and fighting for every piece of real estate, as you could do with the second bit with Martin Truex Jr. On that night, the No. 19 slid up into the No. 9’s left front fender thinking he was clear, resulting in both drivers getting into the wall.

The anger comes more so from the post-race interviews where Truex thought Elliott would give him the spot, as “it’s Darlington and typically you don’t want to go in side-by-side.”

News flash – drivers are racing for wins and a championship here. Do you see anybody laying over so they can just let their competitor win? Also, the day before, Denny Hamlin and Ross Chastain were able to go through there side-by-side battling back and forth, while Chase Briscoe and Busch battled in the spring. What makes this instance different?

BAD: Even though Darlington had drama, the racing was actually pretty dry with the field strung out and passes difficult to make, ensuring strategy be the name of the game. You can’t fault the track, citing the Xfinity Series races, so it’s another drawback with the intermediate rule package for the Cup cars.

GOOD: As we’ve seen all year with this package for the intermediate tracks, the restarts were fantastic to watch – yes, we’re looking at you Indianapolis Motor Speedway. The long straightaways allotted for some of the biggest runs that you have seen all season long, resulting in some thrilling passes for position. Each time they lined up, you witnessed drivers willing to put themselves three-wide in the matter of trying to get the extra spot.

…..But here comes the BAD side to go along with that. The desperation on the restarts was brought forth by one thing – the inability once again to pass once you got into a run. The same image repeated itself as witnessed at Pocono Raceway and other tracks, with the single-file hard to catch and pass train forming around the whole track for the times that we got to see lengthy runs throughout the day.

GOOD: Austin Dillion may not have gotten how far he wanted in the playoffs, but he turned heads via victory lane at Texas Motor Speedway and having a strong performance at Darlington. He was hard charging for Harvick at the end of the event and got close to the rear bumper but unable to find his way around, even sliding off the final corner.

An example would be Indianapolis as everybody will remember the three-wide pass he made on the restart to get by both Denny Hamlin and Austin Dillon to assert himself into position, but it was Childers staying ahead of the strategy right from the beginning with a trip to pit road before the competition yellow that set the stage.

BAD: Tires and Indianapolis, again, as several contenders found themselves out of the event with the same issue. Notably, the flat oval has proven to be tough on tires through the years as each year there seems to be at least one issue. Recall the one year where they had a throw a caution every 15 laps due to a issues; this year, it seemed after Lap 20, the nerves began to form.

The speeds they carry around the two-mile oval only emphasized the issue as the new package sees you let off very little through the corners, resulting in contact with the wall happening at around 150 mph, if not more and a sharp angle at that. Goodyear warned teams to be wary about running low air pressures, and whether that was cause or not, who knows. But when you have guys like Alex Bowman, William Byron, Erik Jones, and Hamlin all having issues and each hit harder than the last, it makes you wonder. Considering the loads they’re carrying through the corners, it wouldn’t be a surprise if that was the case.

GOOD: As predicted, this year’s rookie class was strong and it showed on-track as each driver shined at their own point in the season, highlighted by Cole Custer’s win.

BAD: The TV Networks dropped the ball big time when it came to replays of key moments in a race, as highlighted at Pocono Raceway. Kyle Busch had a legitimate shot to win until an incident with Ryan Blaney and Garrett Smithley.

One of the pivotal turning points for one of the sport’s most popular drivers, and NASCAR on FOX dropped the ball big time. As Jeff Gordon said on the broadcast, “We have no idea how these two got into this position,” since they did not have a single replay of what happened. Instead, they utilized the same computer graphic program that NASCAR uses for RaceView on their website and GPS positioning of the cars to show the three-wide close racing before contact.

The first excuse that will probably be used is that, “sorry, we have a lack of cameras due to #covid19,” which is something that we’re all dealing with right now and making the most of. However, it’s common in racing to know you should have a camera on the entry and off of each corner, knowing that’s the most likely spot for something to happen. Furthermore, the lack of that angle cost them twice since we will never know what happened to end Christopher Bell’s day earlier, either.

Thankfully, the NASCAR Production staff who were shooting other things for their own record with a smaller staff caught the contact, sharing it via the series’ twitter account.

BAD: It would’ve been nice to see Jimmie Johnson go out with some better numbers, matching the rest of his career, but it seemed that he was getting snake-bitten in every direction one time or another this year.

GOOD: Phoenix Raceway has earned it’s rightful spot to be the host of a season finale. Admittedly, the event was a “boring affair” last season, but both races this year went to a different tune of music.

The spring event offered entertainment from the drop of the green flag to the checkered flag. The restarts were their usual chaos with drivers fanning out across the dog-leg as they fought for track position, but the racing as you got 10, 20, even 50 laps into a run kept you watching. There were lengthy back and forth battles for positions, including the lead on occasion, and the ability to pass was there for drivers all day long, as evident by Truex Jr. driving his way to the front of the field after starting last due to an engine change.

The racing was thanks to a combination effort by all parties involved, in hopes of improving the on-track product due to Phoenix taking over the host as the season finale beginning in 2020. The speedway applied the traction compound slightly different, allowing drivers a better ability to get up in the high groove and use it to get runs on the driver beneath them running down by and below the apron.
Additionally, NASCAR went to work on the short track program, shortening the spoiler and taking away downforce from the drivers. As a result, handling was a topic of discussion all day long with drivers able to make their way forward if they hit on the right set-up.
There was also the Goodyear rubber, that lost grip over the course of a run, allowing teams to play strategy in whether to stay out, take two tires, or to bolt on four. It came into play through the final 50 laps of the event, with the decision affecting a couple drivers heavily.
All three of these things followed were requested by the drivers to NASCAR based on their past observations. It’s amazing what happens when the sanctioning body actually listens, eh?