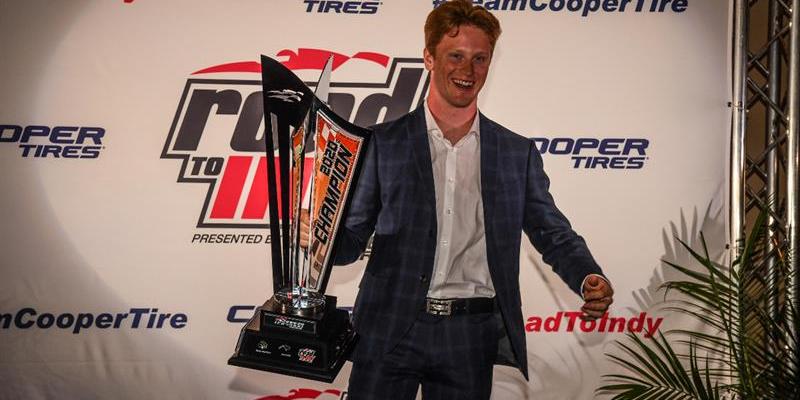 Christian Rasmussen put together a dream season in 2020 en route to winning the Cooper Tires USF2000 Championship. As the Jay Howard Development driver gets ready for the next step on the Road to Indy – Indy Pro 2000 presented by Cooper Tires, he spoke with POPULAR SPEED about his thoughts.

ASHLEY: What are your thoughts on the championship?

CHRISTIAN: We had a great start to the season winning the first six races and all in all, just a great season for me and the team. It’s only the second year in the series for Jay Howard Development, so being able to accomplished what we accomplished was pretty great.

ASHLEY: Which win from the season was your favourite?

CHRISTIAN: I think winning the Lucas Oil Raceway race, because I didn’t have a lot of experience on oval. As you may know, I’m from Denmark and in Europe, they don’t really do ovals at all. So only being my second year doing ovals and being able to win the race as a dominant as I actually did it was a pretty cool accomplishment.

ASHLEY: Admittedly, there was a rough stretch mixed in your USF2000 season. How did you remain confident and stay focused despite the adversity?

CHRISTIAN: I mean, I knew inside of myself that we could win. I know there was definitely some stuff that didn’t go our way in the middle of the season – partially, we had some struggles finding the mistake, I did a couple mistakes; we just had a rough time. But I knew when everything goes well, we were the quickest car, and I think it’s just keeping that mindset and keeping working at it. Whenever came across these problems we may have, we kind of just kept working at it and got through on the other side of it.

ASHLEY: Now looking forward, you get the chance to move up into Indy Pro 2000. What are your thoughts?

CHRISTIAN: I’m looking forward to it. I feel like I’m ready as a racecar driver to take that next step, going to the big car and hopefully we can have a really big season and fight for wins and the championship.

ASHLEY: What track are you most looking forward to?

CHRISTIAN: I’m always excited for the street races, so St. Petersburg and Toronto, but I’m also excited to put another oval on my CV, I guess you could call it, in the World Wide Technology Raceway; looking forward to it. Also looking forward to the Lucas Oil race – always a special race weekend. I mean, I’m just looking forward to getting started, really.

ASHLEY: What’s the biggest thing you learned in USF that you feel will be beneficial for you this season?

CHRISTIAN: I would say, obviously, you always learn as you learn something every weekend. Where I learned the most this year was where we struggled, especially Mid-Ohio. I made some mistakes that I shouldn’t have made, but on the other hand, I learned from them, so learning to be patient sometimes definitely benefits you in a race. So I think patience was the most important thing I learned this year and be able to use the rest of my career.

ASHLEY: Being on the Road to Indy, we know the end goal to race in IndyCar. What would it mean to you to accomplish that goal?

CHRISTIAN: I mean, it would mean everything. It’s what I’ve been working since I was a little kid, since I was five years old starting in go-karts. I’ve always wanted to be a professional racecar driver. The path has changed over the past couple years and we’ve been able to see IndyCar as the main goal. But yeah, being able to accomplish that would be awesome.

ASHLEY: Outside of the Road to Indy and eventually IndyCar, is another type of racecar that you’d like to get behind the wheel of?

CHRISTIAN: I mean, obviously IndyCar is the main goal right now. At some point, I want to do the 24 Hours of LeMan; that’s always been a bucket list item for me, as well.