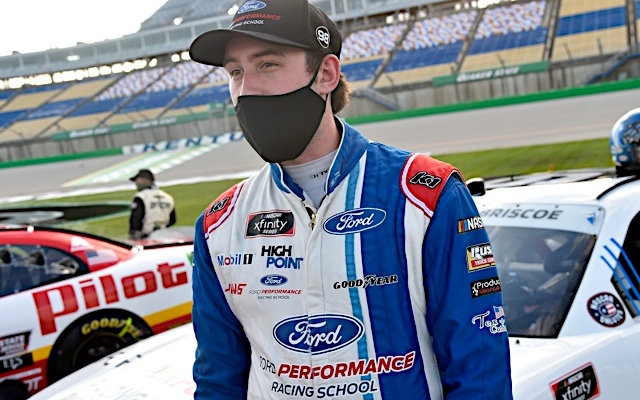 After visiting NASCAR Xfinity Series victory lane eight times in 2020, Chase Briscoe will move up to the NASCAR Cup Series this year, driving the No. 14 Ford for his hero, Tony Stewart and Stewart-Haas Racing.

The Indiana native recently spoke about his excitement for 2021, and his ninth-place finish in the Chili Bowl b-main feature.

ASHLEY MCCUBBIN: What are your thoughts on how the Chili Bowl went? 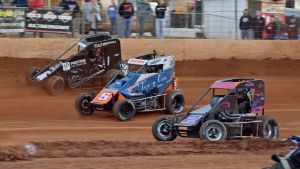 CHASE BRISCOE: It was good. It’s always fun to go down there; it’s good to hang out with everybody that I normally don’t see. Wish the results would’ve went a little better, but still had a lot of fun for sure, so that was always a good time. Looking forward to next year.

ASHLEY: You’ve had some time to think on this, but what would you have done differently to possibly made it further?

CHASE: Just had a little bit more speed. The last three years now – the first year I missed it by one, last year missed it by one, and this year missed it by two. We’re close; we just need a little bit more raw speed to get that last bit out out of it, and other than that, race more dirt. This year I ran the Chili Bowl and than the Millbridge race. It’s hard to race against these guys that do it week-in-week-out, or even the NASCAR guys that race 20 times a year.

It’s hard to compete against those guys, and even the teams. My team only races twice a year where (Christopher) Bell and (Kyle) Larson and those guys are running for teams that race 50 to 60 races a year. That notebook is so good for those and I feel that’s where those guys are so much better. Each time we’re on the race track, we’re trying to learn something – whereas those guys have notes.

ASHLEY: You had Chase Elliott as a teammate. What were your thoughts in looking at his performance and progression over both the Millbridge event and the Chili Bowl?

CHASE: I was blown away, to be honest. To never have done it and go compete and get to the F-Main – that’s no joke, and he was good enough to make the C or B; all he had to do was not get spun out in the b-main that night. He was easily going to make his prelim night b-main, which that’s hard to do. So I was blown away at how well he did, how well he adapted, and how much he genuinely wanted to learn. I thought he did incredible.

ASHLEY: For those who may not be familiar with dirt, why is the Chili Bowl one of those must-run events each year? It seems it always attracts drivers from different disciplines every year.

CHASE: Well, for one, there’s nothing going on. I think just how raw those cars for not a lot of weight, ton of horsepower. There is nothing else going on in the motorsport area that weekend of the year and it just brings a lot of people from different motorsports disciplines to come try it. I think it’s a real test as a racecar driver whenever you got there – the track and the car has a lot of power, and the format provides interesting racing, so cut-throat. The pressure through the week in that building is just a unique thing in motorsports and something that guys from other disciplines are starting to watch and become fans of, and want to give it a try.

ASHLEY: Switching gears, what are your thoughts in moving up to the Cup Series?

CHASE; I’m excited. I don’t know what to expect. I’m just excited to get going and see where we stack up. It’s hard to come up with expectations with where you don’t know where you’re going to stack up, so I’m just excited to get going. It’s obviously something everybody in racing dreams about – to run in the Cup Series. To finally being able to do that, and do it for my hero, physically the car that I grew up cheering for, is just unbelievable.

ASHLEY: Knowing it’s your rookie season, what are your goals and expectations?

CHASE: I think just going back to what I just said – it’s hard to really come up with goals and expectations because I don’t know where I will stack up yet. I think the goal may be to make the playoffs, but it’s hard to say whether we’re going to be a 25th-place team or fifth-place, or me as a driver will stack up against those guys. Until we get those first couple of weeks going,

it’s hard to set goals and expectations. But I think if we can make the playoffs in the first year, it’d feel like an accomplishment all the way down so if we can do that, it’s going to be a good year.

ASHLEY: You’re only going to get practice for eight of the events. How will you go about tackling that challenge while trying to learn the dynamics of the Cup car?

CHASE: It’s going to be hard just because like you said, I don’t know what to expect, what the car is going to drive like. Fortunately, I have a bit of practice with no practice in the Xfinity Series. I thought it put it a lot more in the driver’s hands as nobody’s car will be handling perfect so you have to figure out how to adapt. It’s certainly going to be tough to show up to a lot of these tracks and never sat in a Cup car there, and not know how it’s going to go.

Hopefully it’s going to go but we’re not going to know until we get there. Looking forward to the challenge and I know the team will obviously have a really good set-up and really good cars week-in-week-out, so just need to figure it out as a driver.

ASHLEY: Touching upon the team, though, you have three experienced teammates to lean on. How much will they be a benefit?

(Kevin) Harvick, to win nine races last year, is at the top of his game; to be able to go to a guy like that, as well as Aric (Almirola) who is a veteran of the Cup Series – to be able to have him with similar backgrounds. Then Cole (Custer), who just jumped out of the Xfinity car just the year before so experience, he’s the closest to me. So it’s going to be a hug benefit to have three teammates like that and three guys that will be an open-book to help me out as much as I need it.

ASHLEY: What track are you most looking forward to?

ASHLEY: You’ve had quite the journey to the Cup Series. It’s got to make it even more fulfilling and special to get here. 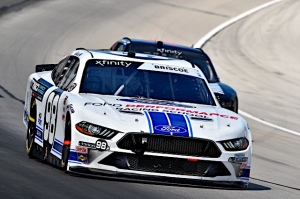 CHASE: It’s unbelievable. Looking back to 2016, I had five pavement races in my entire career – and that was less than five years. It’s crazy to think so much has happened in such an amount of time. To be able to get to drive for people who I’ve gotten to drive for, and have the success I’ve gotten to have with those people, it’s great to be in the Cup Series and hopefully we can continue that success.

It’s definitely crazy to think that even just six years, I was sleeping on a couch, just trying to volunteer at different race shops. Now I get to drive for my hero in the Cup Series. That’s an unbelievable feeling and just so excited to finally get going.

ASHLEY: Based on your journey then, what would be one piece of advice you’d offer someone getting started?

CHASE: I think, for me, the thing that I’ve always told young people, or just younger kids when they come up and ask is the biggest thing is to treat other people how you want to be treated. You never know who that shop person might know, that owner that fired you down the road may need you. Just continue to treat everybody nicely and not burn bridges. You don’t know how that might open the door for you down the road, so I think that’s the biggest thing – just treat everybody nice and whenever you’re nice to people, they want to help you and they want to open doors for you.

That’s what I’ve tried to do through my whole career. Obviously, you have to perform in those opportunities when you get them, but to get the opportunity, you have to want to put in the time and effort. Be somebody that everybody likes, be someone that everybody wants to help out; that’d be the biggest advice to young kids trying to do the same thing.

ASHLEY: I know you’ve ran a lot of different cars in your career, but what’s on the bucket list for you?

CHASE: I’ve been able to run an IMSA race, but I’d love to run one of the prototypes; that’d be fun to do, and the off-road truck stuff is something I wanted to try. Super Late Model on dirt, and the Snowball Derby I want to try to run this year. So there’s definitely things on the bucket list that I want to try to do, but mainly right now it’s drive a Cup car and that’s coming up in a couple weeks. So excited to knock that off the list and hopefully through the year try to knock some more off.