Everyone loves a good underdog story. Whether you prefer Cinderella or Rocky, both types were on display throughout all the NASCAR National Series during Daytona Speedweeks. While the World Center of Racing has a reputation for heartbreak, it’s also a facility notorious for hosting some of the most memorable moments in history and creating opportunities for unexpected athletes.

Here are the most harrowing performances from Daytona International Speedway to start the 2021 season. 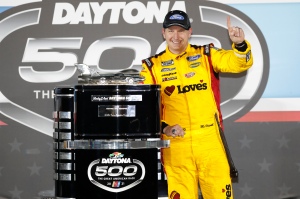 Headlining the week-long festivities comes a story 13 years and 358 races in the making. In the final lap of the 63rd running of the Daytona 500, Joey Logano was pacing the field going into Turn 3 — behind him, two determined veterans in Brad Keselowski and Michael McDowell searching for their first victory in the Great American Race.

Keselowski’s No. 2 absorbed a large shove from McDowell’s No. 34, sending the pair of Team Penske Fords into the wall and triggering a fiery seven-car pileup to end the Daytona 500 under yellow flag conditions. At the time the caution was thrown, it was the Arizona native driving for Front Row Motorsports who would go on to win the first race of his Cup career.

“It’s been a tough road for me,” McDowell said. “I’ve had to spend a lot of years grinding it out, but I finally have felt like these last four years have just been more competitive and greater opportunities with Front Row and Bob Jenkins. Daytona has been so good to us that we’ve been in the top-10, we’ve been in the top-five, we’ve been close.

“I always dreamed of being a race car driver but never thought about being a Daytona 500 champion.”

Not only did McDowell win his first Cup race on the biggest stage possible, but he officially locked himself into a playoff spot for the first time in his career. In 2020, Front Row Motorsports took a massive leap forward; they’ve now taken it to the next level with a season opening stunner.

With the newly modeled schedule for the Cup Series featuring seven road course events, McDowell could be poised for a competitive season.

JTG-Daugherty Racing entered Daytona Beach without a charter, leaving Ryan Preece not  guaranteed a spot in the season opener. The driver of the No. 37 rose to the occasion and made a powerful statement as to why he deserves more recognition.

Preece sped his way to the eighth fastest time in qualifying as the highest scored open car and locked himself into the Daytona 500. That same night, he won a Tour-Type Modified Race at New Smyrna Speedway after starting from the rear.

In the days following, Preece would also go on to score a top-five in his Duel and sixth-place in the Great American Race. He’s now headed to the Daytona road course tied for fifth in the standings with nine stage points; he also showed off his impressive evasiveness skills in avoiding ‘The Big One.’ 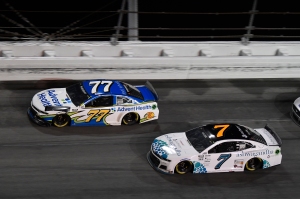 Among the many offseason transitions made prior to the 2021 season, one of the more under the radar moves was Corey LaJoie making the switch to Chevrolet and Spire Motorsports. Seen as a potential candidate for Hendrick Motorsports, this came as a shock to some, but it’s an opportunity the 29-year-old felt offered him the best shot as success.

LaJoie was most enticed by the Hendrick-alliance with Spire and this proved to be the right inclination by the end of Speedweeks. The Chevrolet team fielded two cars, the No. 7 and the No. 77 driven by former Daytona 500 Champion Jamie McMurray — both of which finished inside the top-10 for the first time in the organization’s history.

To add more weight behind LaJoie’s thought process, the equipment underneath the hoods of the two Camaros was powerful enough for them to turn the two quickest laps of the race. This could be the start of a fun pairing for the driver who finds joy in stacking pennies.

The one constant in Daniel Suarez’s career is that he’s able to adapt to whatever equipment he’s given. Having been tossed around to four different teams in five years, it feels as if the Monterrey, Mexico driver never received the appreciation he deserves.

That has all changed with the creation of Trackhouse Racing from Justin Marks and Pitbull.  During Daytona 500 media day, expectations were sky-high for the Richard Childress Racing-affiliate and Suarez even said he felt this was the best shot at success he’s ever had at the Cup level.

Suarez once again proved his natural ability to compete in anything by qualifying inside the top-10, then leading laps in his Duel and finishing eighth. Unfortunately for Trackhouse, Suarez tore up his No. 99 car by avoiding the carnage of the Lap 14 ‘Big One’ and tearing up the front end in the grass. He finished 36th, but there’s good reason to be excited for this new team.

Well, I needed a few hours to calm down and process what happened. Sadly, we got caught in someone else’s mistake early on, and even though I made it through the wreck, my car got killed on the grass. So frustrating, such a shame… (1/4) pic.twitter.com/7gVpfwh5tl

The pair of drivers raced their way into the Daytona 500 and led a combined 12 laps, before succumbing to a parts failure and getting involved in the last-lap wreck. Nonetheless, the youngsters made their presence known at the premier level.

Cindric and Grala will both be running part-time for Team Penke and Kaulig Racing, respectively. The No. 16 will be shared with A.J. Allmendinger for select road course and superspeedway events. There haven’t been any specific races revealed for the No. 33.

So many cool moments to take in this weekend. It’s crazy to think how far we’ve come in what feels like no time at all. Was fun to bookend the field on the pace laps with you, buddy… and wait, didn’t we both lead laps in the #DAYTONA500 yesterday too? 😏 https://t.co/fOapkIA7dZ

Picking up where he left off in 2020 was reigning series Champion Cindric, who ran away with the Beef It’s What’s For Dinner 300. That’s not to say there weren’t some eye-opening performances and placings for the Xfinity season-opener.

Ryan Sieg established himself as a player in this race, leading 23 laps before surrendering on Lap 81 to the damaged vehicle policy. Brandon Brown matched his career-best finish of sixth for the second time at Daytona. Most notably, Lamborghini Super Trofeo North America Series driver Brandon Gdovic picked up the first top-10 in the Xfinity Series for Sam Hunt Racing.

Although just a few placed well, this should be a Xfinity season like no other. With all the drivers seeking a second chance or a shot at redemption (Landon Cassill, A.J. Allmendinger and Daniel Hemric to name a few), expect the highly competitive division of racing to maintain its intense reputation.

Similarly to the Xfinity Series, there’s a certain buzz surrounding the Truck Series. A developmental division once dominated by seasoned veterans like Matt Crafton, Ron Hornaday Jr. and Todd Bodine is now undergoing a rapid youth movement. And like the level above, there are drivers seeking career revitalizations such as John Hunter Nemechek — but for the sake of this piece, we’ll focus on solely Daytona standouts.

Deja vu struck for Jordan Anderson, who shocked the racing world by finishing runner-up for the second consecutive year. In an emotional post-race interview, the 29-year-old revealed they almost shut down their Truck program to focus on the Xfinity Series. The driver of the No. 3 showed audiences once again the sport needs more athletes like him.

Cory Roper (third) and Carson Hocevar (fifth) scored the first top-fives of their careers; this was Hocevar’s Daytona debut. Drew Dollar made his first appearance in his part-time ride at Kyle Busch Motorsports by placing 10th in the season-opener.

Finally, David Gilliland put on a show by running up front and leading his first laps in two years at the Truck level. This was also his first race fielding three cars under the newly named David Gilliland Racing. Hailie Deegan and Tanner Gray fared well until a wreck and drivetrain issue ended their days, and the team owner only mustered up a 14th-place finish.

We should all try to approach every day with Jordan Anderson's energy and optimism.@j66anderson | #DAYTONA pic.twitter.com/qtA6J8T54P

With the amount of rising talent planted across NASCAR’s developmental series, it’s safe to assume the marketing term “best season ever” could apply to all three levels of racing. Under similar circumstances as 2020 in reference to COVID protocols, spending and one-off events, we could see many feel-good stories throughout the year.