With having been involved in the sport for a long time, Steve LeTarte has seen a lot of things change and evolve. So after spending six years off of the pit box, did it surprise him to get a phone call to return this weekend at Homestead-Miami Speedway?

“Knock on wood, nothing surprises me in the sport anymore,” he told NEWS FROM THE PITS. “I mean, look at last year with no practice and it goes on and on and on.”

As a result of the covid-19 protocols in-place, Spire Motorsports’ crew chief Ryan Sparks is unable to be on the pit box for Corey Lajoie. Enter Steve LeTarte, who got the call as a favor to team owners Jeff Dickerson and Tj Puchyr. The NBC Sports TV analyst says it seems to be a turn of the tide, as he used to call on Dickerson to fill-in when he had a spotter that could not make it for one of his drivers.

Despite having spent 10 years as a NASCAR Cup Series crew chief with 15 victories, he is keep things simple this weekend. 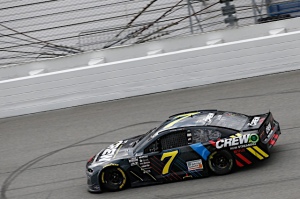 “I’m given this title as crew chief but I don’t want to diminish the role that these crew chiefs through the garage area follow 24/7/365 to do their jobs; I’m by no means the crew chief for the 7 car,” he explained. “I’m filling in for one race, one day. It’s Ryan Spark’s car, its Ryan Spark’s team, its Ryan Spark’s set-up; all I’m doing is managing the day and the race for Corey.”

Through the race, LeTarte plans to in constant communication with Sparks, allowing him to dictate everything in regards to car set-up, with LeTarte solely focused on making any immediate strategy choices.

“The most important thing is to make sure I don’t create any storylines – to be calm on the radio, be very clear on my direction to Corey when we should pit, stay out, and get him in and out safely,” he commented. “If we do have an issue on the race track, I think crisis management – making sure we get whatever repaired, repaired and get back on the race track as that’s something that needs to be done on the fly on the pit box.

“I’m not going to sit here and pretend I had anything to do with the set-up. I’m not a crew chief – I’m a TV analyst who has experience crew chiefing and I’m going to try and fill-in in these unfortunate times and try to keep that 7 car pointed in the right direction.”

The decision for the fill-in was easy for Spire Motorsports, who brought the veteran on-board this season as a competition consultant. The relationship has gone well thus far, with Lajoie surprised in how involved LeTarte has been thus far.

“He stayed up and listened to our radio communications and just reiterated that I’m the guy for the job and that he was impressed by me,” Lajoie said. “Coming from a multi time Cup winning crew chief like Steve Letarte and to have him in our camp means a lot. For him, he’s obviously worked with a lot of great drivers, so for him to tell me that meant a lot. So, I’m going to certainly lean on him for some leadership qualities and things like that I haven’t been around in the past that I can continue to lean on off-the-track stuff with our team, I think that’s going to be just as important as what I can do on the race track.”

Justin Haley, who has been involved with Spire from their beginnings, has felt LeTarte’s influence already, appreciating the openness and honesty in his comments about their program. 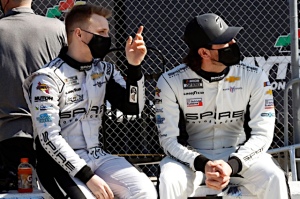 “Steve has believed in me from day one, very thorough with me, and where we’re at as a team,” Haley said. “We’re not just going to blaze into the Cup Series and start winning races, or start doing top-fives – he says brick by brick. I translate it back to what we did at Kaulig Racing, a race team is built around the people that you hire. I think Steve has done a great job going out and finding good people, working with Kevin Bellicourt – my truck crew chief, one of my best friends over the past five years. So having that relationship in the box and honestly that 77 crew was my truck crew. I think there is one guy difference, my engineer, but if there was six guys on my truck crew, than there’s five on the 77. I had a lot of success with those guys on my truck crew, a lot of fun.

“So Steve has been awesome. He’s a great leader. He’s obviously had to go through a lot this week with the 7 team having some COVID issues but he does what any great leader does – he steers the ship through the storm and done a great job so far.”

LeTarte has enjoyed the opportunity thus far, hopeful for the bright future ahead of them.

“Really, this Sunday is a small snapshot of what the whole concept is with me having the opportunity to help Spire build their program and Spire gives me back to me because they help me stay as absolute in touch with the sport as they can,” LeTarte explained. “They’ve been great and you have to remember, last year was tough, even on the media. You guys all know – not a single walk through the garage area, not a single in-person conversation, a lot of zooms, a lot of phone calls. This is really kind of satisfied and helped my anxiety about making sure I understand what is going on in the sport. I feel I owe the fans that and I love Spire, love working with him, and I feel they’ve helped me with that.”

With returning to the pit box and being involved with the competition side, one has to wonder whether a full-time return could be in the cards for LeTarte. However, he turned that down immediately, saying he loves being a TV analyst, and this weekend is about helping “two friends that own a race team.”

In fact, he is looking forward to how this weekend can help with his on-air work.

“I think this is a great chance for me to get thrown back into the fire and what it’s like to be these crew chiefs and have to make these timely decisions,” he said. “I love my job with NBC as an analyst and I’m thankful they agreed to let me do this because it’s going to be a great way to stay as close to the competition and be ready as much as I can for the second half of the season.”