Over the past 365 days, millions have had to adjust to a new way of living both personally and professionally, myself included. March 8 marks the anniversary of the last “normal” event of the NASCAR Cup Series held at Phoenix Raceway, and while the Pennzoil 400 from Las Vegas Motor Speedway fell a day shy of the unwarranted milestone, it felt as if eons had gone by without the sensory overload of a proper weekend.

Understandably, 2020 to current day are times many elect to leave in the past. For myself, realization of gratitude and progression struck immediately as I swung the door open of my vehicle and stepped foot on the asphalt lot just outside the 1.5-mile facility in Las Vegas.

Here I will share my experience in reporting from the track one-year removed from when the COVID-19 pandemic forced harsh restrictions to working as a member of the media and the fanfare of attending a NASCAR event. You’ll see photos and videos I’ve taken over the weekend at Vegas contrasted to moments captured in the Spring of 2020 in Phoenix.

For those who don’t know, I’ve been a reporter for New from the Pits (formerly Popular Speed) since the Summer of 2019. In this time I traveled to six events, in addition to working for Phoenix Raceway’s track publication ‘Pit Notes’ in the years prior. As an ambitious journalist hoping to make a name for myself, I had every intention of attending as many races as possible in 2020 and beyond, making due with what personal funding, as well as my college and work schedules permitted.

The point I’m getting at is I have a profound love for this sport and everyday I get to be a small part of it is a gift. Ever since I was 13 years old and went to my first race, each morning I wake with the realization I’m heading to the track supersedes that of a child on Christmas morning — and that feeling wasn’t relinquished (pandemic protocols and all) in rising early at the Flamingo hotel to start my trek to Las Vegas Motor Speedway.

The only word I can think of to describe this buzz is “magic.”

As I drive my 2018 Metallic gray Ford Mustang past the expansive structures on the strip and through the vast desert landscape down the I-15, I can’t help but inadvertently smile the entire way. Although, in the back of my mind it’s been a bizarre weekend of one-off events with no practice or qualifying. Sure, arriving at the track three hours early on Sunday is what I’m accustomed to, but getting there just two before the drop of the green flag the days prior didn’t feel right.

Rolling down Speedway Boulevard, I’m halted by friendly security personnel at a white tent, where I receive my media credentials and a parking pass after identification verification. From here, I’m directed to another tent and met with a temperature gun to garner clearance into the track — something which wasn’t done one year prior, due to the unknowns of the virus.

Next, I park my car outside in the media lot outside the venue – wedged between the ticketing office, Gate D and the souvenir haulers. In 2020 (at both Phoenix and Vegas), I was permitted to park in the infield with easy access to the media center, garage and other amenities, but heavy restrictions understandably abolished that. 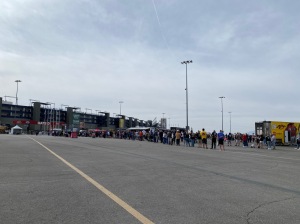 Instead, I’m eager to make my way into the track with the thousands of other fans on hand — something I haven’t done in years. Exiting my car, I’m immediately smothered by the smell of fair foods. The barbeque-fried-blend assaults my senses and takes me back to when I’d roam the outskirts of Phoenix Raceway.

A cloudy haze over the track blesses myself and the sellout crowd of 12,500 with near-perfect 65-degree weather and a slight breeze. My ears are buzzing with the muffled chatter of race expectations, plans to buy merchandise and much more; it’s a welcomed change of pace after being bound to my serving job at my family’s restaurant in Mesa, Ariz. (Amici Pizza) since Phoenix in November.

Entering the gates with my laptop and Mountain Dew in hand, I’m met with another temperature check point. I notice various hand sanitizer stations inside as spectators flood the entrance in droves dressed in facemasks and race attire without diminished excitement due to the “new normal.” This is obviously contrasted to the fresh-faced crowd in attendance last Spring without a mask mandate. 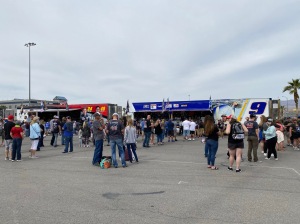 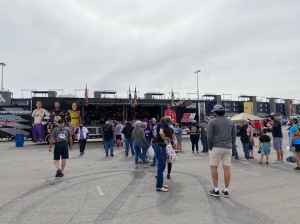 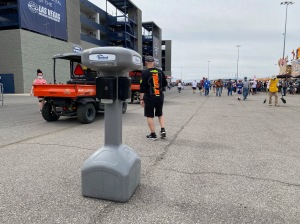 The souvenir haulers are flooded with giddy race fans; Chase Elliott and the Joe Gibbs Racing semis have evidently formed the longest lines of consumers. Country music from artists like Jason Aldean and the Zac Brown Band blares from the intercoms around the facility for all to enjoy. This sadly doesn’t hail in comparison to the pre-race concert put on one year ago with Pitbull and Blake Shelton for a NBC promo.

I make my way to the press box, where I’m greeted by track staff and various communications directors. There are 10 high-top tables, but only four working media members in the suite (myself included), with three rows of seating against the glass and a view of the entire track — we’re located behind the start-finish line and somewhere between the exit of Turn 4 and the frontstretch.

No Jeff Gluck, Bob Pockrass, Chris Knight or any of the usual suspects typing away.

While a tremendous view, press box restrictions limited the sense of perspective I like to seek on race days. At Vegas, I like to walk atop the neon garage and through the pits to get a better understanding for trends and depth throughout the day, so this came as a disappointment, but each day at the track is a privilege.

Another thing I took notice of were the meals provided by the track distributed in takeout containers. For those who don’t know, typically, you’d go into a cafeteria area in the facility and take a break to refuel with your peers. I always equated it to happy campers in a rec-hall with their respective cliques — one of my favorite parts of each race weekend.

After taking notice of my surroundings and setting up my workspace, I head out the doors and peer off the third floor overlooking the entrance to the track. I’m floored by the turnout, even though the sellout crowd was announced.

The two lots adjacent to the ticketing office are jam-packed with automobiles and campers. There’s still a staggering line of fans making their way through the gates. Smoke billows atop the food kiosks as masses of people make their way to the grandstands. This sight almost brought a tear to my eye seeing some semblance of normalcy brewing in NASCAR and professional sporting events.

Finally, it’s time for driver introductions. For the first time in maybe four years, I made my way into the grandstands to gain some perspective for the fan experience leading up to the green flag. Even at 15-percent capacity and social distancing, the 80,000 seat complex looked pretty full.

Went down in the stands to get a sense of the fan experience (one day short) of a year since the last “normal” race.

No surprise, @ChaseElliott with the most cheers today.

It was a breath of fresh air to see the men, women and children in the stands cheer and jeer for their respective drives. As expected, Elliott received the most noise, with honorable mentions to Daniel Saurez, Bubba Wallace, Kyle Larson and the Busch brothers.

As for pre-race ceremonies, fans were treated to a live performance of the National Anthem by Jessie James Decker — one of the first times this wasn’t sung remotely all season. Las Vegas Raiders quarterback Derek Carr gave a fiery command to start the engines from the infield, something also done virtually in 2021 with the exception of Pitbull in the Daytona 500.

There was also a flyover performed by the U.S. Air Force Thunderbirds, courtesy of the Nellis Air Force base just three miles away for the first time since the Great American Race as well.

Fast forwarding through the outstanding racing on display at Las Vegas, Larson found victory lane in his fourth start with Hendrick Motorsports in an emotional day for the sport. I looked down from the press box and saw hundreds of fans shouting, pumping their fists and high fiving — but something was off. 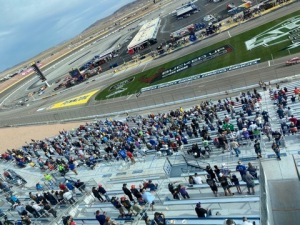 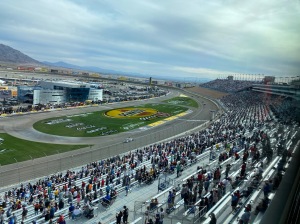 Yes, there were pretty much unanimous cheers throughout the grandstands and it was a “sellout” crowd, but for what an emotional moment this was, the roars should’ve been magnified. Both Vegas and Phoenix races were max capacity last year and the electricity was intoxicating. Obviously, nothing could have been improved upon on this front; it was just unusual.

Finally, there’s the post-race workflow. Normally, the top-three finishing drivers and the winning crew chief will make appearances in the media center for the journalists in attendance to question. Much like the access since April of 2020, all interviews were conducted via Zoom. Again, there’s nothing that could be done to change this; it was just upsetting to not see the joy on these competitor’s faces in-person after a hard fought race.

One year since the last “normal” race weekend, I had a blast. Seeing the thousands of fans, hearing the screams and feeling the vibration in the press box given off by 38, 750-horsepower stock cars was a feeling I missed dearly. Although many things have changed, I can see we’re headed down the right path how both the reporting and fan experience once were in NASCAR.

Like each race I attend, I’ll always cherish my first race weekend reporting for New from the Pits in 2021 for at-track coverage. The staff at Las Vegas Motor Speedway were always welcoming and they did their best to ensure every person in attendance felt comfortable and safe. Special thanks are in order for Jeff Motley and Shannon Stephens for their kindness and accommodations throughout the weekend.

If you were able to get through this long-winded piece, thank you for reading. For my friends and fellow media members, I hope you were able to relate to some of these feelings and experiences and I can’t wait to see you all again very soon. Race fans, hopefully this gave you a better understanding of the media perspective, and I know we’ll all be back at the track in the not-so-distant future.

Be sure to follow News from the Pits and myself (@Cole_Cusumano_) for great coverage throughout the year, including next week when I’ll be reporting from Phoenix Raceway.