“I think every driver has a similar story, where their parents are the whole reason that they are racing,” Ben Rhodes told NEWS FROM THE PITS. “Racing at the base level, at the roots, is such a family sport. We would load up and go to the nearest racetrack and that is what we did every weekend. People always ask what you do with your free time – we raced. That’s what we do. We never went to a lake. I never played football or baseball. I never played anything else. All I did was race. I have my parents to thank for that.”

When many people hear a similar quote like the words above, a lot of eyes turned towards the father and ask about his influence. However, just as equally, many competitors have their mother to thank for their rise up through the motorsports ranks.

For Ben Rhodes, his mother was the team manager, feeding him while changing a motor or gears if necessary, scraping tires for the asphalt events, and cleaning them for the dirt track.

“She really had a lot of hats,” Rhodes commented. “I was so young at the time. I was trying to help where I can. They taught me everything I know. My dad was kind of the guy that was setting them up and my mom was like the truck chief really. She juggled a lot of hats. I for sure wouldn’t be here without them, and my mom especially for the way she kept our family together and made sure we got to the racetracks.”

Being a “steady base and foundation” for the family is a similar feeling felt through the garage, as Ricky Stenhouse Jr. says his mother was the same way for him. While he and his father spent many hours in the shop working on the car, they never had to worry about having an empty stomach.

“My Mom is a nurse, so with everything that I did, riding dirt bikes and playing all kinds of sports, she always took care of me – and she still does,” he said. “It’s always really nice to still have my family come out to the races. This year we’ve been doing a lot more dirt racing, which, my family is allowed to come to, which is nice. So, she’s been coming to those races with us.

“But she is the one that always held us together. We’d race Saturday nights, and she would be the one to make sure we got up for church the next morning on Sundays.”

Allmendinger’s family influence to his career goes along the same path, as he recalls his parents mortgaging their house three different times so he could have everything he needed, and any opportunity available.

“On my mom’s side of it, when I was BMX bike racing, my dad was still racing local dirt race tracks,” he recalled. “So when I was racing BMX, it was just my mom and I going to all these races because my dad was still racing. Then when I went into go-karts, my mom and dad were always there at every race, but my mom got tired of not understanding what was going on with the go-kart and what we were talking about. So she read every racing book they had, or any computer game they had if I had a manual of what the racecars were, she read it all and actually became the engineer on my go-kart for a long time.”

Allmendinger went on to say that he would have fellow competitors ask him how to adjust the go-kart, and he would tell them to talk to his mother – only for them to think he was joking. 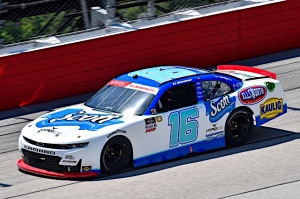 “My mom was the engineer on the go-kart and it was always the push that I needed and my mom was actually the tougher one on me than my dad,” he continued. “I split my parents perfectly in height. So my dad is 6’2, my mom was 5 foot but I was definitely scared of my mom because she was the one that was hard on me when it came to making mistakes and stuff like that. it’s the reason why I’m racing.”

This past weekend at Darlington Raceway for the NASCAR Xfinity Series, Allmendinger ran a throwback scheme honoring his first trip to NASCAR Cup Series victory lane with JTG Daughtry Racing at Watkins Glen. That win was only made more special by his parents being there.

“That’s what made that race so special,” he commented. “My parents were there with my wife Tara, and we’d only been dating for a year at that point. They were in victory lane to be able to share that so that’s part of the why the throwback scheme is special for me. It was a special day in so many ways, but it was special for me because my parents were in victory lane with my wife Tara.”