Through four races in the ARCA Menards Series, Thad Moffitt has scored three top-10’s, including a season-best third at Phoenix Raceway.

As the David Gilliand Racing driver prepares for Toledo Speedway, he shared his thoughts on his performance and being Richard Petty’s grandson with NEWS FROM THE PITS.

ASHLEY MCCUBBIN: What are your thoughts going to Toledo Speedway?

THAD MOFFITT: I think that we have a legitimate shot at running good this weekend, running in the top-three. We had speed there last year; we just had some unfortunate things happen. The starter went out before the start of the race and we lost the radio 30 to 40 laps into the second race.

I think we had legitimate speed and we had some stuff to build off of with our short track program right now. I’m really looking forward to getting there and seeing how we stack up to the 18 (Ty Gibbs), the 20 (Corey Heim), and the other Venturini Motorsports cars.

ASHLEY: What separates Toledo as a short track compared to others across the country? 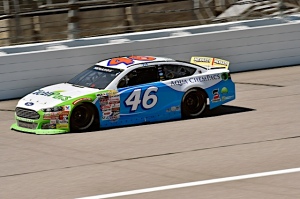 THAD: I think Toledo’s atmosphere is different than some of the other short tracks., the line and patience you have to win races there, and the line that you have to run to make max speed makes it more unique in its own right. the more you wear your tires there, it turns into a two-groove track and you can make speed on the outside there especially the more laps you have on your tires.

ASHLEY: What are your thoughts on your season so far?

THAD: I think that we’re lacking a little speed right now. We need to find a little bit more speed to compete with the 18, 20, and the 15 (Drew Dollar), but I think we’re good shape right now. We’re fifth in points and we’ve had really good showings, with the exception of Daytona, but I mean other than that, our worst finish is sixth. I’m really happy with how we’ve been performing; I think we just need to find a little more speed to win races and I feel the team is capable of that.

ASHLEY: What do you feel your team could do better moving forward beyond just finding speed in general?

I think our short track stuff is really good right now and capable of winning races but where we’re slacking a little bit of speed and experience on my part.

ASHLEY: Looking down the road, what track are you excited to get to?

THAD: I had a lot of fun last year at the Daytona road course. I think the road courses this year like Mid-Ohio and Watkin’s Glen, places that I haven’t been to really excite me to get there and see how we run and how we stack up. I’ve been doing a lot of work on my road course stuff through the off-season, being that it’s become a big part of NASCAR. So me putting all the work in and hopefully going to Mid-Ohio and Watkin’s Glen and just seeing results.

ASHLEY: You’ve got some famous genes. What is it like being involved in motorsports as the grandson of Richard Petty?

THAD: I haven’t really ever known anything different, so it’s kind of a tough question to answer because being his grandson is awesome. You kind of have a lot to live up to and big shoes to fill, but I’ve never really known this sport from a different point of view. I kind of always had this view on motorsports from being his grandson, and it’s helpful and hurtful in some ways. It kind of overshadows your career and everything that you’ve done already, and it gives you some high standards to live up to begin with.

I think I really enjoy working with him and having him as a grandpa. All in all, he’s just a really cool dude to hang out with and even if you’re not talking racing, he’s a cool dude to talk to and share stories. I’m honored to carry the Petty family legacy.

ASHLEY: With your family engrained in racing, did you always want to be a driver? What is it about motorsports that you enjoy?

THAD: So I didn’t decide that I wanted to race until I was eight. It was never really forced upon us. They never said I had to be a racecar driver, or you had to try a racecar; it was I came to them and it was at the Daytona 500 when I was eight years old. Aric Almirola had just ran really well and I was walking out to pit road with Grandpa and just said, “This should be me one day.” And he was like, “Yeah?”

Then later on a couple months, I was just hounding him about buying me a go-kart and they were hesitant because of what happened to Adam (Petty). Then finally I got the shot and fell in love with it. I really love every aspect of racing – the family aspect of racing, and the people at the race track, and the fans are awesome. The speed is awesome. Just getting to do what you love for a living is really cool, too.

I think just being in that atmosphere and world my entire life, I haven’t known anything different or wanted to know anything different. My brother is really big into football and my sister isn’t the biggest into racing; I was the only one that was really big on the racing stuff. Just really enjoy being able to do it and trying to carry on the legacy.

ASHLEY: Five years down the road, where would you like to see your career?

THAD: Honestly, every short track racer wants to run in the Cup Series one day. I think for us, it’s just getting the proper funding that we need and getting more seat time and experience. Whether that’s in the Truck Series or Xfinity Series or ARCA Series, I think we just need to get some more laps and races under our belt and run for some more championships. I think eventually five years down the road, I could see myself in the Cup Series but if we’re in the Xfinity Series at that point, I’d be fine with that, too.

ASHLEY: Outside of stock cars, is there something you want to get behind the wheel of down the road?

THAD: I think IndyCars would be really cool to drive. They seem really cool. We’ve raced with them at Iowa and World Wide Technology Speedway and some other places, and they just blow my mind how fast they corner and how loud the yare. It seems really cool and a lot of those guys have stepped into it for a long time. I know there’s some ladder system like NASCAR, but I think it’d be really cool to drive an IndyCar one day.

ASHLEY: I know you’ve taken a slightly different road than most, but based on your own journey, what would be your advice to someone else just getting started?

THAD: I think that the biggest thing is don’t let anything get you down; keep your head up. Just showing up and racing is a big deal and people are going to say things, and you’re not always going to have the best races; sometimes you will have the best races, but I think you can’t give up especially if you want it really bad and think that you’re capable or know you’re capable of doing it. You just can’t let anything get you down.