Shepherd on Lessard – “He didn’t like it and he blatantly wrecked me.”

Pete Shepherd knows what it takes to get the job done in the NASCAR Pinty’s Series. He also has shown speed at Sunset Speedway previously in late model competition.

His return to the series almost ended in celebration, but ultimately concluded with frustration with another competitor.

Shepherd showed speed in both races, challenging for the lead in both instances. Unfortunately, contact at the front on the restart relegated him to 12th in the first 125-lap affair.

“I feel like for a brand new car, we were pretty good,” Shepherd told NEWS FROM THE PITS. “I felt like the APC / Total Lubricants / Canusa Car was pretty good. I feel like the first race, we freed it up a little bit and that hurt us. The 80 car made a good move – got into the back end a little bit, got around me, no harm no foul. Fell back a little bit and then got in a bit of a maylay on the backstretch. But had a good time.” 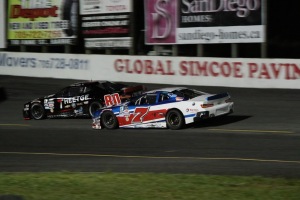 The second race, meanwhile, it was a bump from the lead courtesy of eventual race winner Raphael Lessard on Lap 63. Shepherd was aggressive trying to get back through, cutting a tire, ultimately finishing 13th.

“Started fourth in race two and I could tell right away by about Lap 4 or 5 that we had the car to beat,” Shepherd said. “Anything can happen in these races but I did catch the 80 car eventually. I was giving him a couple shots – much like the first race that he was to me in the first race. I don’t think that was dirty racing; I think that’s strategic.

“When I finally made the move on him, he overshot the corner himself, he overdrove the car, and made a clean pass. He didn’t like it and he blatantly wrecked me. That was what happened. Didn’t hit anything but that’s what caused the end of our day, trying to come back through traffic aggressively.”

Lessard said in his post-race comments the bump came from Shepherd repeatedly getting into him while battling, and spun the late model veteran to teach him a lesson.

“It’s just really unfortunate that’s how he felt he needed to race me to get the win,” Shepherd commented. “I guess he was trying to teach me a lesson – I’ve been racing for more years than the guy has been alive for, but it is what it is.”

Fortunately, Shepherd will have more opportunities to get back to victory lane this year, returning behind the wheel for Flamboro Speedway and Delaware Speedway.

“We’ll re-group, and try to make the car faster,” he said. “Like I said, no payback is in the plans and it’s between two drivers. They’ll be another driver in the car and it’s not the other guy’s fault. I just want to race hard and clean and get a win for everybody that has worked hard and deserved it for working hard on this car.”