DPi Goes Down to the Wire with Last-Lap Lunge

BRASELTON, Ga. – The route to the championship was straightforward: The top finisher among the two contenders at Michelin Raceway Road Atlanta would be the champion.

The finish, of course, was anything but straightforward.

Felipe Nasr held on as Ricky Taylor tried to pass him on the final lap Saturday night, recovering after Taylor bounced through a gravel trap and back on track in front of him, to claim the IMSA WeatherTech SportsCar Championship Daytona Prototype international (DPi) title by finishing second in the Motul Petit Le Mans.

Nasr was chasing eventual race winner Harry Tincknell but leading the championship battle when Taylor tried to pass Nasr heading into Turn 10A on the final lap. The two cars made contact, and Taylor’s No. 10 Konica Minolta Acura ARX-05 bounced off course and returned to the track ahead.

But Nasr’s No. 31 Whelen Engineering Racing Cadillac DPi-V.R passed Taylor heading into Turn 11 and held on for second place in the race – and the championship – through the final turn of the final race of 2021 to prevail by 0.405 seconds.

“I knew he was going to try to make a last-minute move, but that was a little too wild,” Nasr said. “All the way to the gravel and then coming across the track. If there was grass there, he could have just continued. He had to go through the gravel, and then I had to drive to take the position back.

“There are many ifs. If I was behind and I had to do something, for sure you’ve got to try it. Maybe it was a little too much, but I get it. He’s a racer, too. He’s got to try something.”

While Nasr was going out as a champion, Tincknell, Oliver Jarvis and Jonathan Bomarito were helping Mazda go out as a Motul Petit Le Mans winner in its final race in DPi. Tincknell drove the No. 55 Mazda Motorsports Mazda RT24-P past Nasr for the lead in Turn 7 with 22 minutes remaining in the 10-hour race and held it to the finish.

“To be honest, I just had a feeling the whole race that the opportunity was going to open up through (Turn) 6 into 7,” Tincknell said. “It’s not really a normal passing place, but I also knew in the back of (Nasr’s) head, he had a championship to think about as well.”

Nasr’s championship run came in his final race with Action Express Racing, which announced last month that Tristan Nunez will replace him in the No. 31 car next season. Nasr’s co-champion, fellow Brazilian Pipo Derani, spoke of the emotion behind the championship.

“For me personally, it was very emotional to look back and slowly start to realize that I’m a champion,” Derani said. “I’ve learned from the mistakes I’ve made and I’ve grown so much as a person over the last year. To finish this chapter with Felipe was great.”

Taylor, Filipe Albuquerque and Alexander Rossi had the same mission as their rivals – keep the No. 10 Acura ahead of Nasr, Derani and Mike Conway in the No. 31 Cadillac. That mission was in reach for almost all of the race’s 410 laps.

“The championship literally came down to the last corner,” Taylor said. “I just have to say I gave it everything I had. There’s going to be a lot of nightmares before Daytona (the 2022 season opener) just thinking about what I could have done differently.”

But at times, Nasr’s final stint was difficult for his teammates to watch.

“It kept us on the edge of our seats all the way to the end there,” Conway said. “It was hard to watch. I had to walk off a couple of times from the TV and catch my breath. This is what this championship is like. The IMSA series is really tough. It always goes down to the wire.”

At one point in the race, the Mazda was three laps behind with various mechanical issues, but the driver trio regained the distance in a matter of two hours and charged into the lead. The victorious farewell was an upbeat sendoff to the car’s four-year run in IMSA’s top class.

“At the start of the program, we were spraying fire extinguishers at it,” Tincknell said. “Now we’re spraying champagne at it after one of the biggest races in the world.”

They weren’t the only ones spraying champagne into the chilly Georgia night. Nasr, Derani and Conway held an emotional celebration of their own.

No. 8 Tower Motorsport Benefits from Late Penalty to Win in LMP2

The Le Mans Prototype 2 (LMP2) class saw a three-way tussle for the Motul Petit Le Mans victory, with No. 8 Tower Motorsport ORECA LMP2 07 drivers John Farano, Gabriel Aubry and James French gaining the victory when the No. 52 PR1 Mathiasen Motorsports ORECA was penalized postrace for an unserved pit-lane drive-through for incident responsibility in a late clash with the No. 8.

It was the second Motul Petit Le Mans win for both Farano and Aubry; the first for French.

The No. 52 still clinched the LMP2 championship for drivers Mikkel Jensen and Ben Keating with the runner-up finish. They also took home the IMSA Michelin Endurance Cup title along with third driver Scott Huffaker.

Jensen was leading as the 10-hour clock ticked down to the final minutes but needed to save fuel with the No. 8 Tower ORECA charging.

“We had to fuel save because the (No.) 8 car was catching us and we couldn’t afford to stop again,” Jensen explained. “I got a fuel number, I had to keep it every single lap. In the end, he just got very close and then we had contact in Turn 10.

“But most important, we won the IMSA championship, we won the (Michelin Endurance Cup), so we accomplished everything we wanted to achieve this season. But it would have been nice to win this one to finish off.”

Keating, the 11-year IMSA veteran, was pleased to collect his first season championship. Even with the disappointment of losing out on his second Motul Petit Le Mans win, the Texan managed a smile.

“We’re walking over here talking about how (mad) we are still about how the race finished,” Keating said, “but it was an exciting race because of all the yellow flags. Even eight hours into the race, four cars were all on the lead lap and we were only one lap behind the DPi field. It kept incredibly close the entire race.”

Steven Thomas, Tristan Nunez and Thomas Merrill finished third in the No. 11 WIN Autosport ORECA, holding onto second in the season standings. 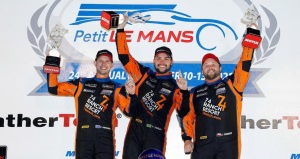 The No. 74 Riley Motorsports Ligier JS P320 arrived at Michelin Raceway with a narrow lead in points, but after 10 grueling hours of competition, the team departed carrying a bag full of trophies.

Not only did drivers Gar Robinson, Felipe Fraga and Scott Andrews lead the most laps, but they enjoyed a runaway victory as Robinson cruised to the WeatherTech Championship in the inaugural season of the Le Mans Prototype 3 (LMP3) class.

“Every race is its own animal, but this one carried quite a bit of weight because the championship was on the line,” said Robinson, who opened the season winning the Rolex 24 At Daytona and added four more victories. “Risk management was definitely a lot higher this weekend. We knew we had to take care of the car all weekend to make sure we came out on top. I think we executed that very well. I couldn’t be more proud of my team.”

The No. 74’s nemesis, the only team standing between it and the title, was the No. 54 CORE autosport Ligier shared by Jon Bennett, George Kurtz and Colin Braun. They were in striking distance – lurking 50 points behind – going into this season-ending battle.

But the No. 54 was never really a threat. The car had problems throughout the race and retired in the ninth hour of competition.

The No. 74 did face a race battle from the No. 30 Jr III Racing Ligier, but it wound up a lap behind Fraga in second place.

“Felipe just brought it home, like he always does,” Robinson said. “It’s incredible to watch that guy do what he does. You think you are going as fast as you can go and he finds another half second. The way he goes through traffic and how he handles these races so well is really incredible.”