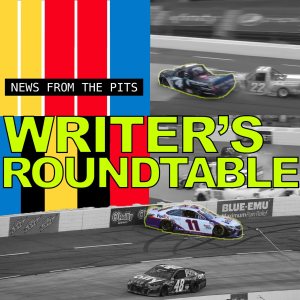 Throughout the playoffs, there was a lot of aggressive battles between those in contention for the championship and the rest of the field. It brought forth a couple different topics, ranging from what’s the racing protocol to whether playoffs are a proper format for motorsports.

Our writers recently took some time to debate that exact very topic.

Mitchell Breuer: I believe drivers should race each other the same regardless of playoff status. Now, I do believe this also includes just using common sense. For example, if you don’t have tires, then whatever you don’t have to pit. But, if you know you’re going to get ran over and potentially cause a wreck that could have a lot of implications, just drop to the back of the pack. You’re not going to gain anything by staying out, no one ever does.

Cole Cusumano: This in an interesting topic of discussion sparked between all three NASCAR National Series (mainly Trucks and Cup) in the waning stages of their respective 2021 playoff campaigns. First off, I am of the thought process that no postseason contender should intentionally be taken out. This is something I’m a firm believer in even during the regular-season, with the exception of lower speed tracks like Martinsville and Bristol. The bottom line is you don’t want to put anyone’s lives at risk, even with how safe the cars are (and we don’t even know if that will be the case with the next gen). 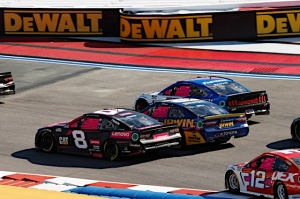 In terms of racing etiquette, I feel there should be minor leniency with playoff drivers, but at the end of the day everyone is a competitor competing for something. For example, Tyler Reddick at the Roval and Alex Bowman at Martinsville — I don’t fault them for their actions. They were in positions to potentially win the race and should do everything they can to end up in victory lane. There are around 40 entries for all 36 races for a reason. They don’t cut the field to 16 once the playoffs roll around. If you’re a team in contention for a win, you have every right to go for it, postseason or not.

I believe aggressive racing is great for the sport, but only when displayed with respect. Bump-and-runs are inevitable at short track, but I don’t feel contact is necessary when trying to advance positions at higher speed tracks for non-playoff drivers. The occasional “racing deals” are bound to happen, but as alluded to earlier, physical intent is not okay. Whether intentional or not, the perception is that what Austin Wayne Self did to John Hunter Nemechek at Martinsville was on purpose. Even if it wasn’t, if it’s perceived that way, then it’s too much aggression from a non-playoff contender running near the back of the pack.

Ultimately, aggressive racing in the postseason from competitive non-playoff drivers should be encouraged, but done respectfully. There are around 40 cars in the field for a reason and everyone has a right to victory if they’re in position. Not to mention, if you’re a driver competing for the title, you should embrace the challenge and want show everyone why you’re in the position you’re in — racing for a title.

Ashley McCubbin: Protocol should be simple – race with respect. Isn’t that what you always want to see anyway? I mean, give a bit of space, race hard for position, don’t screw a guy over is what we’ve all grown up with. Certain people stepping over the line and possibly “screwing another guy over” because of something happened earlier in the year – well, you should not have done that to begin with probably.

Now Mitchell brings up a good point about gambles. I don’t know if I want to take the same stance because sometimes, we’ve seen drivers stay out on older tires and able to hold off the field. I mean, how many times has clean air been key and a strategy of staying out allowed you to fend them all off? There’s also other teams that have been able to turn their gambles into better finishes than where they were running, and shouldn’t you be allowed that opportunity? After all, everybody is racing for their own goals, whether a certain finish to impress a sponsor and/or a certain amount of points. 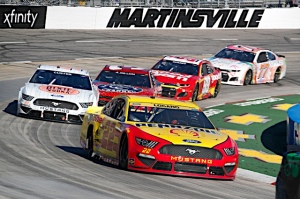 Do playoffs belong in racing with the variables at play?

Mitchell Breuer: I am pro-playoffs. I believe they have done nothing but make the sport better, and that is evident by some of the most memorable moments over the last few years being directly related to the playoffs. I do not think you get some of those classic moments in a season-long format. That said – I do think there is room for debate on whether the playoffs should end with one championship race, or a championship round.

Cole Cusumano: I’m on the fence about having a postseason in racing. As long as the deserving driver ends up hoisting the trophy when it’s all said and done (which is normally the case), I think the pros outweigh the cons. The current postseason format makes for a highly entertaining form of competition and I believe it benefits the sport more than prior formats.

Many complain it doesn’t always reward the best driver all season, but this is the same winning formula represented in the NFL, NBA and other professional sports organizations. In 2008, the New England Patriots went 18-0 before taking their first loss to the New York Giants in what would be the championship game. It’s a part of sports and that’s what makes them so magic and unpredictable.

In terms of growing their audience and inciting the best on-track product, I’m an advocate for NASCAR’s current playoff format. I will say, I want what’s best for the sport though. If that means a new process or doing away with the postseason completely, I’m on board if it helps the sport.

Ashley McCubbin: I wasn’t a fan at the beginning, always believing that everything you’ve worked for shouldn’t be thrown away by a matter of bad luck or circumstance in three races.

However, that has changed in witnessing how teams rise to the occasion and the pressure, prove themselves in unspeakable ways that you probably counted them out otherwise – and oh yeah, the excitement and intrigue. I admit that I am a huge fan of those now.

The only thing that begs to question is the tracks that are included in the rounds. Is it fair to base a champion off of Talladega, where you’re 90% chance of getting caught in someone else’s wreck? Also, throwing in a place like Talladega and Martinsville together where chances of wrecking are higher may not be advised. Perhaps some discretion could be used in that category to gather a stronger champion at the end.