With seven victories and 12 podiums in 18 races, Christian Rasmussen made the most of his rookie season in Indy Pro 2000 presented by Cooper Tires, capturing the championship.

As he gets ready to move up to Indy Lights presented by Cooper Tires, he shared his thoughts with NEWS FROM THE PITS.

ASHLEY MCCUBBIN: What are your thoughts as you look back on the season?

CHRISTIAN RASMUSSEN; My thoughts this season everything went to plan. I mean, I was very happy with how I performed myself, and how the team performed. It was great that it all came together at the end winning the second championship in a row. It’s definitely a huge accomplishment, especially being a rookie driver in the series for the team and I; winning it in the first shot was huge so I’m very happy.

ASHLEY: What stands out to you the most as you look back on last season?

CHRISTIAN: As I look back, I would probably say the two wins at IMS stood out for me. it’s always great being IMS and driving around the Indianapolis Motor Speedway and especially winning there, standing on the podium twice that weekend was awesome.

ASHLEY: It wasn’t all sunshine roses, as I know you had a rough weekend at Thunderbolt Raceway the weekend before the finale. Did that bring forth extra nerves going into Mid-Ohio? 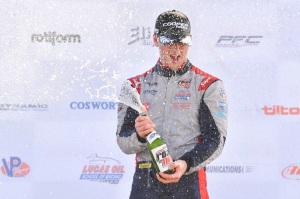 CHRISTIAN: I don’t know. I go into every weekend with the same mindset, trying to win races and get as many points as possible. That particular weekend did not go as planned. We missed the set-up a little bit in qualifying and it made us qualify at the back. Especially around there, it’s hard to overtake so that was kind of – it wasn’t a great weekend. We still came out on top and still had a points advantage against my competitors, so it was just about managing that.

Even thought you can’t win every single weekend, as log as you manage the gap and stay in front for the end, that’s all that matters.

ASHLEY: With the championship, you move up to Indy Lights for 2022. What are your thoughts?

CHRISTIAN: It’s a great opportunity that Anderson Promotions and the Road to Indy provide for us drivers that win the scholarship. It’s an honor to be a scholarship driver for the second year in a row; it will be huge. I’m looking forward to a year progressing again. Going into Lights will definitely be a great opportunity.

I’m looking at the championship the same way that I looked at it last year – defiantly going for an overall win, so hopefully with the testing that I have planned this winter, we’ll be able to compete for that.

ASHLEY: It’s always been announced Hunter McElrea will join you next season. What is it like in having that close competition between yourself, Hunter, and even Braden Eves?

CHRISTIAN: It’s great if everyone makes it up there. As I said, I enjoy racing talented drivers and it’s a good group of drivers – all of us have championships behind us, and I’m just looking forward to getting racing in Indy Lights.

ASHLEY: What’s the biggest thing you learned in USF2000 and Indy Pro 2000 that will benefit you in Indy Lights?

CHRISTIAN: I think running the Road to Indy it teaches you a lot, partly because you’re running the same circuits. I’ve been practically every circuit that I am going to next year; I think there’s a few new ones with the street circuits that are coming. But other than that, having those layers on the track benefits us.

I think anything personally I’ve learned is having a little patience in the racing. Sometimes let the race come to you, instead of chasing it like crazy and making mistakes. So I think that’s kind of maturing as a driver, getting better all the time, and the Road to Indy is a great platform to do that. 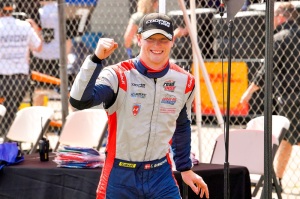 ASHLEY: Speaking of the tracks, where are you excited to get to in 2022?

ASHLEY: This is the last step of the Road to Indy you’re entering. What would it mean if you could complete the ladder, and race in the NTT IndyCar Series?

CHRISTIAN: That’s the dream, right? That’s what I’ve been chasing for my whole life to hopefully get a deal in the top level series like that would mean the world to me. I mean, I don’t know what else to say. That’s what we’re all chasing right now – to be one of those few drivers that actually gets to do it would be awesome.