This week, it was all about allowing you to get to know our staff a little more, in sharing how our interest in racing blossomed, and turned into being a journalist.

Mitchell Breuer: I have loved NASCAR for as long as I can possibly remember. And it wasn’t like a cute, oh he’s got a shirt and maybe a couple diecast that he plays. I remember being like three or four and being very stressed about the championship battle in the NASCAR Camping World Truck Series, and always impressing/annoying family relatives with how much I know about NASCAR and challenging to say a number and I could name them driver in all three of NASCAR.

Really it was this like freak obsession that led me to thinking, you know, this is like the only think I care about, why not pursue a writing career in it. Before I started at News From The Pits back in 2015, I had a blog in high school that was probably not the best written work but it like actually had interviews and it would get some attention hear and there but I was a kid, I had no idea what I was doing. The nice thing about that though was we had a “goals” class in high school, where essentially you would work a year long project, and they would judge you how you are doing and try and help you out.

It was after all that, that my teacher in that class suggested I reached to industry professionals. So I did, and I got all sorts of advice, but one piece of advice that I really cherish was from Bob Pockrass. It’s been about eight years but the email is still in my inbox and it was just paragraphs of knowledge. Funny enough, he actually suggested that I send writing examples to audition for News From The Pits (then POPULAR SPEED) and I did, and all these years later I’m glad I did. 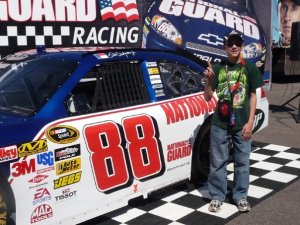 Cole Cusumano: I was a late bloomer in terms of my love for NASCAR and the realization I wanted to become a sports journalist.

I was born and raised in Staten Island, New York, and as you can imagine, the motorsports scene is virtually non-existent in that area. I wasn’t introduced to NASCAR until after my family relocated to Arizona in 2006.

My father had a friend who was a huge NASCAR fan and he got the opportunity to attend his first race with him in the Spring of 2008 at Phoenix Raceway. As is the case with many newcomers to the sport, he was taken back by the power of the cars and intensity of the sport in person, in addition to the fanfare.

He fell in love with what he saw and took it upon himself to get my brother and I merchandise in hopes we would follow suit; a blue Jimmie Johnson shirt for my brother and green Dale Jr. attire for myself, due to our respective favorite colors. It’s important to note that in this point in both of our lives, my brother nor myself had any interest in sports whatsoever. When he got back from the track, we turned on the recording of the race my father had just attended and fell in love instantly.

NASCAR quite literally consumed our lives. We’d watch religiously, scribble 48s and 88s on all of our schoolwork and people at school would refer to us as “the NASCAR kids.” Not only did this ignite our love for overall sports, it steered my brother and I on our respective career paths.

When I was in high school, I was motivated to work in NASCAR more than anything. Being young and naive, the only path I saw was as a mechanic. I had little to no knowledge of cars at all, even with watching the sport for so long, but I wanted to dive straight into getting my hands dirty so I could work behind the scenes.

I actually attended a trade school during my high school years for automotive, then went community college for the same education and graduated with an associate’s degree in automotive technologies from the Toyota T-Ten program, collecting some ASE (Automotive Service Excellence) certifications along the way.

After working at a dealership as a mechanic for five years, I realized it wasn’t my calling. I found the manual labor to be very taxing (for those who don’t know, I’m a little over five-feet tall and around 120 pounds) and I was very unhappy mentally. Seeking change, I went back to community college to seek a degree in theatre and fine arts. I’m a cinephile (or “film buff”) and always had a longing to work in the cinema industry as a cinematographer or screenwriter. I actually wrote screenplays in my free time during my latter adolescent years.

As you can tell by the scribing of screenplays in my spare time, I was always drawn to writing. That was typically the only area of schooling I excelled in and I was always praised by professors for my unique voice and attention to detail. During my second semester of college for fine arts, I was taking an advanced english class and breaking news journalism class, both of which I really enjoyed. My two professors at the time opened my eyes to a new avenue in terms of a career path and I thought why not blend my two loves — sports and writing.

Those are my long-winded summaries of how I became acquainted with NASCAR and journalism as a profession. I was 12 years old when I began indulging in the sport and 22 when I realized I wanted to pursue sports journalism. 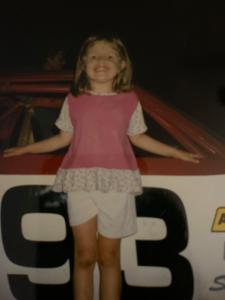 Ashley McCubbin: So my racing beginnings started a real young age, actually. My family started taking me to our local short track, Sunset Speedway, when I was five years old. That sparked the interest, and only increased more with the family becoming involved when I was eight with my uncle racing. Regular trips to there each week engrained racecars into me, and from there, you could not turn me back as I was thrilled in going each week.

Now does that turn into where we are now? Going into my pre-teen years, I developed an interest in photography – taking yearbook class and media arts helped with that. So when it came to some in-class projects that didn’t seem interesting, I decided to attempt to combine with something that I liked. I completed the projects at the race track, and sharing those photos promoted a couple drivers to message me about purchasing, or possibly doing hero cards.

There was also a growing frustration in having a lack of results that were kept track of, so I began writing them each night, posting online for people to see. Then when people asked what happened, I’d answer and that turned into writing articles.

I still wasn’t super confident in everything until I had a driver message me at the end of the 2010 season and say, “Can you manage my website? Can you make sure there’s weekly updates? I trust you.” I took the bull by the horns for the following season, which turned into a dream year as it was a local short track championship campaign. That caught the attention of others, who then reached out looking for similar things.

Flash forward 10 years, and I’m completely in love with the writing and photography together, absolutely loving sharing stories and confident in what I produce. It’s crazy to think a simple offer from a driver turned into running both NEWS FROM THE PITS and SHORT TRACK MUSINGS, as well as doing public relations for a couple local tracks, series, and drivers.