Throughout the NASCAR Camping World Truck Series season, there were quite a few of these moments. So it seems only fitting we take a glance back through the year at what was said

“It definitely helps winning races and having the confidence in doing the things we’ve done in 2019 and 2020. When you start the season with the way we have and not the way we wanted to start off the season, those two races are a wash and Vegas starts our season. Vegas becomes race number one for us because those two races didn’t just go the way it was supposed to. Daytona is one of those races that are up in the air; anybody can win that race, and then the road course, we had some issues with the throttle body sticking and stuff happening. When we got back to the shop, we looked at what we can do to do better next time. When you have stuff happen, you just have to keep your head down and move forward. With success that I’ve had with this team and everybody at HRE, not really anything knocks us down. All of my guys here, they have just as much as confidence we can go win every race just as I do. I’m excited to get to Las Vegas to see if we can get our Toyota Tundra up front and see where we stack up against the field. Hopefully we can get a win out there.” – Austin Hill

“It hasn’t been an easy ride to the position where I am now. When I got in the series in 2016, me and my father started this race team and we’ve grown a lot since then. You are racing against teams with lots of funding and great drivers. I look back at 2016, and I think the biggest difference is the guys that I have working on my stuff, I would definitely say I gained a lot of experience in trucks, and been able to get a lot of seat time. I feel I can drive the truck to it’s full potential. I feel as comfortable as I can in these race trucks. I would definitely say that’s due to the group of guys working on the truck and its like home, feels more comfortable during a race than it did before.” – Austin Wayne Self

“Look – you spin the tires really easy here, but this is a really challenging track – step up or step out, that’s what I say. I thought they were fun. I thought they were challenging. You have to be on you’re A-game. You can’t put yourself on someone else’s door. I obviously did but that was the last lap, but other than that, I didn’t – and that was going for the win; I still finished the race and didn’t wreck out, right? You have to make calculated risks and make runs and be on the offensive, and that’s every place that we go to in the Truck Series. I wouldn’t say it’s Darlington that causes this. It’s just people driving wild and it’s a narrow race track so you have to figure it out, and I guess there were a lot of people tonight that were taking more than they gave, and that seems to be a theme in the truck series. A lot of people take and sometimes you have to give if you want to finish the race, and that’s all there is to it.” – Ben Rhodes on restarts at Darlington Raceway

“I don’t feel there’s a lot out there. I feel like you come in, nobody knows you, and you’ll get pushed around very easy. It’s like a new kid on the playground, he’s going to get pushed off the slide first compared to the kids that have been there for a while. It’s difficult. Everybody’s agenda, right? We’re all in must wins or put in that box to where you don’t race whose around you, but you’re going to spin them, wreck them, because there’s no penalty for it. There’s still respect out there, but there’s none when you get to the front, just because those wins are so rare and hard to come by, and there’s penalty for it so everybody takes advantage of it.” – Carson Hocevar

“It’d mean a lot. Definitely humbling experience going from full-time and racing for points and doing everything that you want to be doing, to cutting back and running part-time. It’s defiantly made a lot more hungry this year, and made me appreciate the opportunities that I’ve gotten in the past more. So if I could get that step up and go back full-time racing, it’d definitely mean a lot. I now understand the full extent of going full-time and having the opportunity again would be really special.” – Christian Eckes 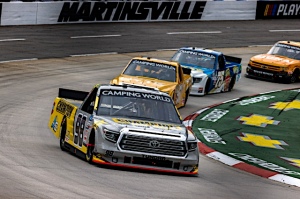 “I don’t want NASCAR to step in like Formula 1 does or something like that. but there’s need to be an incentive to not wreck these trucks. We’re in a format where it’s win and you’re in, points don’t matter that much in the grand scheme of things as you want to win at all costs. Maybe there’s a way that you start in the back in the next week or you lose the points, and maybe it would discourage some of the blatant wrecking. But I don’t know what to do until NASCAR steps in and say it’s a problem – and I know some of the fans like it, some hate it, but its what we’re up against.” – Grant Enfinger

“I think Kyle has definitely been a huge help with that. Any time he is behind the wheel, he is always asking for more and trying to get better. For myself, being able to have him as a boss, friend, someone that I can ask questions and pick his brain about, I feel like he’s the type of guy that will shoot you straight, tell you how it is whether you like it or not. I really like that as if I mess up, I want to be told that I messed up, I need to do a better job and that fuels me. For me, it’s doing whatever it takes to get better but there’s a lot of hard working people at Kyle Busch Motorsports and in the Toyota R&D Camp that put in the time and effort to make the program as successful as it has been.” – John Hunter Nemechek

“Well, for one, I wouldn’t take Xfinity as it’s not a higher series; that’d be a step down. The only thing higher about Xfinity is their pay, but the competition level, they’re way stronger in the Truck Series compared to the Xfinity Series. In Cup – it’d have to be like Joe Gibbs. He’s the king of all Toyotas. But at the end of the day, I’ve had a great career with Duke and Rhonda Thorson. They’ve always been so loyal to me and been great to me and it’s always been we’ll go win races together, we’ll build this team from the ground up. I started there in 2001 and it was we’ll make it a championship team, win races together. There’s not many owners like them.” – Matt Crafton

“I mean, there’s a lot I need to learn, but I think a little more experience right now in last year driving those mile-and-a-halves has been a huge help. I’m just really looking forward to this year. With the experience I gained last year, I think I am a way better driver than I was. I think I just need to get better overall, get more seat time, and the more seat time I get, the better I’ll be at mile-and-a-halves,  short tracks, road courses, superspeedways, and I want to be better at all of them as to win a championship, you’re going to have to be good at all them. I’m just going to keep working hard.” – Raphael Lessard 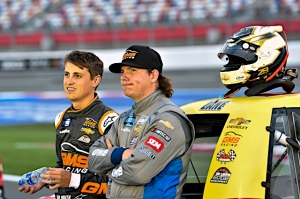 “Gosh, I have no idea. We’ve had meetings recently with numerous different teams, and it’s really hard. It’s really hard right now to come up funding to do it. 10, 20 years if you could win and you had talent, you would get the job, then there was a lot of sponsorship money going around and everyone had rides. Right now, it’s really hard. I’ve learned that in the last couple of weeks trying to find a ride and trying to find somewhere to go. That’s really hard. Honestly, right now, I have no idea. I’d love to go Xfinity or Cup racing; I would love to have an answer for that but I don’t.” – Sheldon Creed

“I mean, it’s not probably where it needs to be. There’s probably still work that needs to be done. First and foremost, we’re still building this team and we had to go out and get the truck, people and all that stuff. We built some new oval trucks, but our road course, speedway and dirt truck is used equipment. We’ve been trying to update our stuff as best as we can. We’ve had speed at the Daytona road course, ran inside the top-five for awhile, and we had some speed at COTA. So hopefully we can come through without issue and not get used around, we’ll be okay.” – Stewart Friesen on their road course program

“A lot of the times, you make yourself better, the truck gets better on its own. It’s like going golfing – fix your swing before you go out and buy $3000 in golf clubs. It’s a parallel to racing as make yourself better, learning your craft and how to do your job in a better way, you’ll become better. I explain to people that the reason Kyle Busch is so good in a Truck or a Cup car is because he’s just become so good. His crew chief, his engineers, his engine builders, his tire guys, his mechanics – they don’t sprinkle some fairy dust on the truck and it’s just magically that fast. Kyle found a way to be that fast so there’s no matter what you do, there’s always ways to find some way to do better. You know if your truck is at 90 percent, you can push it to be 98% and 100% and go win. But a guy like Kyle Busch has a capability rate of 75% and make it a 95%. So it’s learning from a guy like him, and others guys from the Cup Series and learning how to race better.” – Tyler Ankrum

“I need to have a run-in with someone that I really, really like this year so they can become my teammate,” Rhodes joked. “I get into a run-in with Johnny Sauter for two years in a row at Canada and then he becomes my teammate, and then obviously Christian and I had a run-in last year and he’s now my teammate. But I’m proud to say that Johnny and I started off on a rough path and I would now consider him one of my better friends at the track and hopefully that can be the same with Christian and I. No offense Matt, Grant (Enfinger) and Johnny, but I really don’t have anybody that’s my age as a teammate so it’ll be nice to have someone that’s closer to my age that I can relate to a little better.” – Ben Rhodes