We’re just about set to start the 2022 NASCAR season, and that includes a great calendar of dates spread across the United States. However, it also gives us a chance to ask a question. If you could make up to five changes to the NASCAR schedule, what would they be?

1. Shorter schedule. I believe in leaving the audience with just enough but still wanting more. The NFL capitalized on this, having the shortest schedule of the big sports leagues. It amazes me that other sports haven’t followed suit. Nobody cares about the NBA until the playoffs, there are too many baseball games to keep track of in the MLB.

In NASCAR it feels like the summer portion of the schedule, while having entertaining races such as Sonoma and Watkins Glen, get largely forgotten about and loses meaning because there are so many dang races. Not to mention, especially when looking at this year’s schedule, there is not a lot for breaks. Having a shorten schedule would fix of those two big problems and, in my opinion, ultimately grow the sport.

2. Shorter races. One of the most entertaining races of the schedule each and every year is Watkins Glen, and each and every year one of the shortest races is Watkins Glen. Pocono is another great example of having better races once the race got shorter. Keep the Daytona 500, Coca-Cola 600, and Southern 500. Other than that, we do not need 500 mile races. More 300-350 mile races, heck, maybe even timed races.

3. I’ve rambled enough in the first two sections, I’ll keep this short. More. Short. Tracks. If we got to completely reinvent Auto Club Speedway, or I don’t know, build a short track in a football stadium, just to get more short tracks. I don’t care, just do it.

4. Move the championship race to Las Vegas. Listen, I know Vegas is not always the most exciting race on the planet but, speaking from personal experience, they make the NASCAR weekend feel huge. They made being the first race of the playoffs a big deal, something that I don’t think Darlington Raceway has done well. Phoenix Raceway is a great track, but I think having the championship weekend in Vegas would make the season-finale feel like a must-watch event, even if the race isn’t the best.

1. Come back to Canada. Seeing Canadian Tire Motorsports Park missing off of the 2022 schedule is a big shock and it sucks. There’s many reasons the event was successful, too. It was sold out every single year, and there was always an exciting finish to the event that kept you on your toes. Ty Dillon vs Chase Elliott, or John Hunter Nemechek vs Cole Custer are great examples. There’s also a big fan base north of the border, as evident by 40% of Michigan International Speedway’s attendance being from Canada.

Considering we keep getting ripped on TV packages, specials, and more, we should at least get a race as our dedication for being a fan.

2. I want to take the same approach that Mitchell Breuer took. Short tracks. The excitement at Martinsville Speedway last season proved just why they are necessary, and should be repeated. There’s also a lot of great facilities around the country that we do not need to create one-off events like the L.A. Coliseum either.

3. Short races for attention span reasons. Let’s face it, Sunday marks a great time to watch a race but you can always sneak in a nap and not miss much. Pocono Raceway was famous for that in my house, until they shortened by 100 miles and compacting the action together resulted in my attention. With everyone busy between work, distractions, and other technology, it’s time to find a way to make the most of people’s time. 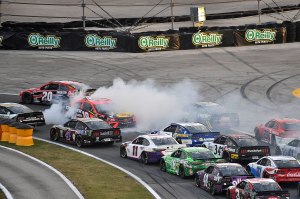 4. Some tracks do not need two dates on the schedule. Let’s hit more markets, make most of the facilities around the country by a single visit each place. That way you also emphasize variety, and hey, maybe we can follow through with my second request.

5. The Daytona road course needs to return. I didn’t know a facility putting on great shows would see it removed from the schedule. It’s much better than playing chicken dance chance and destroying a bunch of cars. You’d think they’d want to go down that route in saying we may have a shortage with the suppliers, too.