No. 3 Corvette Returns to Winning Ways in GTD PRO at Sebring

Corvette Racing claimed its 12th victory in the Mobil 1 Twelve Hours of Sebring Presented by Advance Auto Parts since 2002, earning the triumph with drivers Antonio Garcia, Jordan Taylor, and Nicky Catsburg in the No. 3 Corvette C8.R.

Corvette achieved a bonus 13th Sebring win in the one-off Sebring “sprint” race that was staged in 2020 as a schedule addition due to COVID-19.

This year, Garcia qualified the No. 3 Corvette third fastest in the GTD PRO class for the second race of the 2022 IMSA WeatherTech SportsCar Championship, then assumed the lead 58 minutes into the 12-hour marathon that was staged in hot and humid conditions.

From there, Garcia and his co-drivers made no mistakes. The mid-engine Corvette was fast and reliable, and the team executed clean, penalty-free pit stops. In all, the bright yellow C8.R was out front for 247 of the 323 laps completed by the GTD PRO class winner.

Catsburg did his part by emerging at the front of the field after a tense midrace battle with the No. 25 BMW Team RLL BMW M4 GT3, while Taylor completed the anchor leg of the race to seal the victory for Corvette by 5.464 seconds over the No. 63 Lamborghini Huracan GT3 shared by Mirko Bortolotti, Marco Mapelli, and Andrea Caldarelli that was fielded by TR3 Racing.

Corvette Racing’s latest triumph came as somewhat of a relief for the team after a challenging GTD PRO class debut in the Rolex 24 At Daytona International Speedway in January. The C8.R struggled for straight-line speed on the high-banked Daytona tri-oval, and the No. 3 trio also encountered mechanical gremlins on the way to sixth in class.

Taylor credited a two-day test at Sebring in early February that helped the team and the drivers understand how Michelin’s GTD PRO control tire responds to changes on the new-for-‘22 GTD PRO homologated Corvette.

“To have zero issues around here is a big feat in itself, because 12 hours around here is harder than 24 hours at Daytona or Le Mans,” said Taylor, who earned his second Sebring 12 Hours trophy. “I was surprised how quick we were, especially in clean air. Once we got to the front, the name of the game was to maintain track position, whether by saving fuel and extending windows or saving tires.

“The guys nailed the strategy, and I think that’s really what kept us out front all day,” he added. “It’s nice to get another endurance race win for the C8.R and start our championship fight again.”

This was Garcia’s fourth win in the Twelve Hours of Sebring. “Obviously at Daytona, we were not quite there,” he remarked. “Our testing here recently really paid off, and it’s nice to complete some unfinished business from last year.”

Catsburg took on a 3-hour, 20-minute triple stint and emerged from the car fired up after his highlight reel battle with Eng. The BMW and the Corvette were locked together for a sequence of corners before the torque of the Chevrolet small-block V-8 pulled the C8.R ahead entering Big Bend.

“That was awesome going side-by-side for that long,” Catsburg exclaimed. “The good thing about racing with these guys is that they let you live, and you let them live. Then you can make an awesome show.”

The next round of the IMSA WeatherTech SportsCar Championship is the Acura Grand Prix of Long Beach, set for April 8-10 on the downtown Long Beach street course. 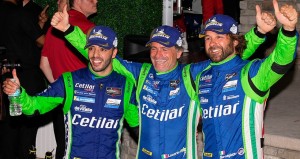 With huge smiles and proud hearts, the all-Italian Cetilar Racing team took in all the congratulations and back slaps at Sebring International Raceway’s Victory Circle.

Although they went into the race optimistic about their chances, they recognized in hoisting the trophies for winning the GT Daytona (GTD) class in Saturday’s Mobil 1 Twelve Hours of Sebring Presented by Advance Auto Parts, how difficult their path had been.

And that’s exactly what made it so rewarding.

The No. 47 Ferrari 488 GT3 team took the lead for good in the GTD class with just under an hour and 20 minutes remaining in the endurance classic on Saturday. It was an emotional end for the team that started fifth in class and endured a busy day of on-track and off-track activity for with its driver lineup of Roberto Lacorte, Giorgio Semagiotto and Antonio Fuoco.

“Sebring is one of the most legendary races in the world, one I dreamed of when I was young,’’ Semagiotto said after spraying champagne. “I didn’t understand exactly why Sebring was legendary, now I understand why, because it is so difficult, so tough for the drivers, the cars, the teams. It is crazy.”

Many of the pre-race favorite and ultimate frontrunners had to overcome issues in the race.

Friday’s Motul Pole Award winner, Zacharie Robichon, part of the defending Sebring winning GTD class team, ran into problems almost immediately after the green flag. He pitted the No. 16 Wright Motorsports Porsche 911 only nine minutes into the race with a list of possible problems. Ultimately the car had to go behind the wall for repair and returned to take a rather valiant 10th place in class.

With the Wright team’s competitive departure, that left the early portion of the day to the No. 96 Turner Motorsports and the No. 1 Paul Miller Racing BMW teams to dice it out. Three Mercedes teams – Alegra Motorsports, Winward Racing and Gilbert Korthoff Motorsports took turns out front throughout the middle of the race in what was easily one of the most competitive classes of the day. At times, the Top-10 GTD cars were all on the same lap and separated by less than 10 seconds. Ultimately, four cars finished on the lead lap.

For a while it looked like longtime race favorite, Bill Auberlen, would get to toast his impressive 500th start with BMW with a bottle of winner’s champagne, but the No. 96 Turner Motorsports team fell out of podium contention in the closing hours.

The No. 32 Gilbert Korthoff Motorsports Mercedes-AMG GT3 – with drivers Mike Sheen,Stevan McAleer and Daniel Juncadella – finished second to the Ferrari by 49 seconds.

Both cars led laps but were unable to get around the winning Ferrari, who pulled away from the field in the closing hour out front.

“Especially this race for us was tough because we start from the fifth position. I crashed in Turn 1 and rejoined the first positions after three hours because of a great strategy by the team,’’ Semagiotto said. “Seriously, I didn’t expect to win this race and I really don’t have words to describe what I am feeling now.

“Our qualifying was just unlucky, because we knew we were faster and we did the fifth place just because I found traffic and those kind of things. But we understand exactly in qualifying we were on top of things.

“And 12 hours is very long. Anything can happen.’’