“They Said What?” IndyCar Series Edition

Throughout the NTT IndyCar Series season, there were quite a few of these moments. So it seems only fitting we take a glance back through the year at what was said.

“I think more attention, but that doesn’t really mean more pressure. I think it brings less pressure than last year because we’ve already achieved what we wanted to show and get it. We showed that we’re capable of fighting for a championship – we already proved that. So now that we don’t have to do anything that’s uncomfortable as we did that last year. That doesn’t mean that we don’t have to have a good year – we just don’t have to do something that’s been never done. more attention for sure.

I think last year we were a bit of under radar. Nobody really like trusted us until the last couple of races where they said, “Oh, it’s real.” I didn’t have any pressure from media or our competitors. It’s good. The added attention is good. It just means that we’re doing a good job.” – Alex Palou

“I wouldn’t say pure talent, but pure race craft. You’re able to just do laps, because I think the accessibility in go-karting because you can just put the car in the back of your truck, and go to a track, and drive. It’s not quite the same with our racers, so I think it’s the availability in being able to drive 24/7 was the biggest benefactor that you learn at such a young age and you learn the basics. Let’s say the basics would be probably what has helped the most, because I would say it’s all about timing. Yes, you can be good, but if you’re in the wrong material back then you don’t stand a chance. But if you do well enough in the worst material, then the other competitors, then you look even better than them. I was fortunate enough to do that one year – and that was the year that I won the European Championship. I wasn’t in the best material, and that’s kind of what set me into cars and got my career started. – Christian Lundgaard

“It’s so amazing to drive one of these cars around here; they’re so fast and the way they handle these bumps compared to the junior cars is pretty incredible. But the big thing is we have so many fans out here and racing in my hometown in front of those in IndyCar, I couldn’t be happier with how well the event turned out. Thankful for all the fans that showed up, and all the friends and family that have supported me throughout the weekend.” – Dalton Kellett on Toronto

“I mean, it’s just incredible. There’s so much speed. The one thing, the first lap I was just screaming the whole time because the car can just hold it. I couldn’t hold myself and the car was perfectly fine flat out through all the corners. That’s my biggest takeaway. Those tires can hold (smiling).” – David Malukas on his first laps in an IndyCar Series car

“I mean, he’s just one of those rare guys that comes along that is an exceptionally talented, naturally gifted driving a car, maximizing the car. He never gives up. He’s pretty strong at all types of circuits that we go to, whether it’s short oval, speedway, road course, street course, he’s pretty versatile. He definitely has all the tools to develop into a champion. That’s the goal with him, is to get a championship.” – Ed Carpenter on Rinus Veekay

“I would say that I know we can do better. Remember this situation is every place we’re going is the first time. This half of the season, we’re going to be visiting places that I went to last year so hopefully that will improve. But up to Nashville, all the races that we’ve did except Indianapolis will be new, so it’s just like my first time. My first time since 2017 here and Iowa and keep going. I would say its part of the process. I would love to be a little bit better, but it’s part of the process.” – Helio Castroneves 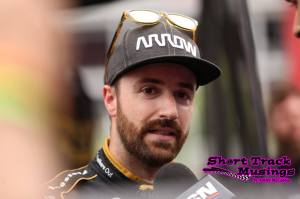 “It’s great. It’s crazy over the few years that there’s been a handful of Canadians that got so close but didn’t quite get the opportunity – Parker Thompson, Scott Hargrove. I would have loved to have seen them continue in open-wheel. They’re both doing great big things in SportsCars now, so they’re doing fine. There’s a couple kids coming up that are very talented and we have high hopes for the future. As a proud Canadian and a huge fan of the sport, I love seeing as much Canadian presence as possible and having Dalton and Dev on the grid this year is great. I’m jealous they get to race in Toronto after the past two years after not getting to do that. it’s one of the coolest things as a Canadian getting to race in your backyard, but I will be there cheering them on and watching. In this new role, I have a lot more time and capacity to get in the grassroots level of motorsports back home and help untrue, and encourage the Canadian talent right now.” – James Hinchcliffe

“(Turn) 8 is probably the trickiest one on the track. The bumps get larger as you get closer to 10, that’s where you’re putting the load in the car and you need the grip, and it caught me out in one of the practice sessions. Didn’t hit too hard which was nice, but it’s a really sketchy corner.” – Jimmie Johnson on Toronto

“Unfortunately, I went to pass Jimmie and I don’t think he saw me – I was trying to get alongside of him, and he just went to the apex. He was just focused on the people ahead of him. I don’t blame him. I think it was more of a racing incident. It’s just unfortunate with how it ended.” – Kyle Kirkwood on his incident in Toronto 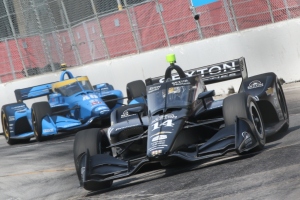 “Well, I think he’s just a very calculated driver. He’s actually an engineer. He’s a schooled engineer. He does think about it a lot and is really good at looking at data and trying to figure out how to go faster. He’s been improving over the weekends, and that’s all we asked of him to do as he showed up and where he was at and just trying to keep improving. That’s what we’ve seen. He’s still got a little bit to go, but he’s on the right track, so I think that’ll be good for him.” – Larry Foyt on Kyle Kirkwood

“Until you race a full season in INDYCAR, it’s hard to have an appreciation of just how competitive this series is. Any driver on any team can win if they hit their strategy right and make no mistakes. The talent level in this series is off the charts and I love that kind of competitive environment.” – Scott McLaughlin

“It’s been fantastic. We obviously haven’t achieved what we wanted, but it’s a great team and the Dale Coyne boys have done a great job with everything every weekend. It’s just a lot to learn for a new team. I’m happy with the experience so far.” – Takuma Sato

“On those really slippery cement patches, the actual weight downforce matters, so you get more weight force on the front tires, and it actually helps turn the car. That was a big problem when the car had really rearward weight, that the front tires would not work over that cement. Obviously at some point, when you have high grip, that weight matters laterally. But the grip is so low that the lateral — the actual weight downforce is more than the actual lateral force. So, yeah, it’s interesting. To me it actually helped at that specific track, at Toronto.” – Will Power