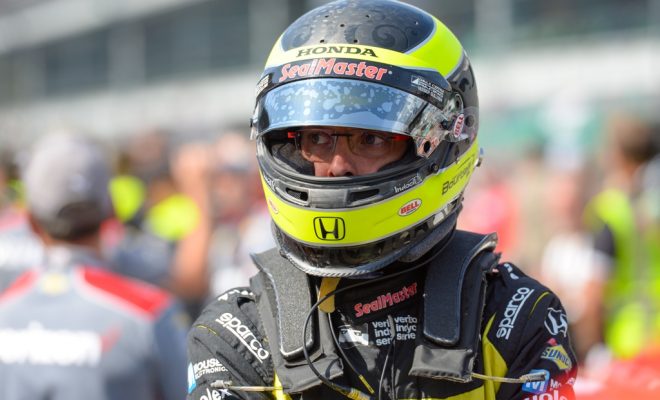 After missing the Indianapolis 500 last year due to a crash in qualifying, Sebastien Bourdais will start this year’s event from the fifth position.

“I am looking forward to it,” he told POPULAR OPEN WHEEL. “I think we have a good package for the Indianapolis 500. The car felt good in race trim on practice on Monday. I think now it just depends on what the weather is like in how things go – whether it’s warm or cool. It look like it should be hot so it should be a good show.”

Last year during qualifying for the Indianapolis 500, he made substantial contact with the wall, suffering multiple fractures to the pelvis and a broken right hip. He underwent successful surgery for his pelvic injuries on the evening of the crash, before going through physical therapy. He sat out for several months, before returning to run the final three races of the schedule.

“It means a lot as we are in the championship hunt now so it’s great to be up there,” he said. “But after the crash, absolutely it’s big in coming back and being able to go out all out in race trim.”

So far this year, he has shown speed on a weekly basis, highlighted by a win at St. Petersburg, but ran into misfortunes and bad luck along the way. In his two most recent starts, things have improved, as he was able to score back-to-back top-five finishes.

“Great performance, but lots left on the table,” he said. “We’ve had the speed everywhere as there’s speed no matter what event this year. However, the finishers have not been there from multiple mistakes, like speeding on pit road.”

While he will be able to start the biggest race of the season, there will be two drivers left sitting on the sidelines – James Hinchcliffe and Pippa Mann – who were both bumped out of the field in qualifying. While the drama of seeing who qualifies and sometimes a big name left on the show can be big, Bourdais noted perhaps the rules should be changed in this day and age.

“I hope it doesn’t effect James and Schmidt’s program too bad in not making the show,” he said. “I know if we hadn’t it would’ve with a lot of things depending on it. I know some people like tradition and think it’s top, but I’m on the boat that something should be there to protect the full time entrants.”