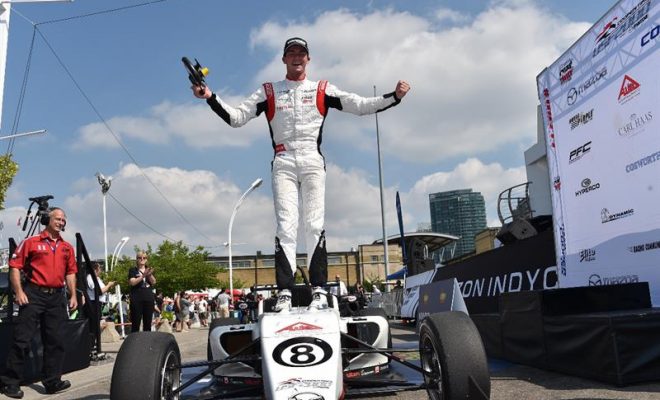 TORONTO, Ontario — Kyle Kirkwood may be a rookie in the Cooper Tires USF2000 Championship Powered by Mazda, but his statistics wouldn’t lend you to believe that. The Cape Motorsports driver has not finished outside of the top-five in nine races this season, with seven wins to his credit.

The last of those two victories came at the Honda Indy Toronto this weekend, as he swept both races.

Starting third in Saturday’s event, he immediately moved his way to the lead on the opening turn after making the move underneath pole sitter Dakota Dickerson. From there on, it was cruise control to the win.

“I didn’t expect to go into the lead right in the first corner, and fortunately it happened,” he told POPULAR OPEN WHEEL. “He left a little bit of room, and I took the space that he left. We were able to get first and maintained the distance to the checkered flag.”

He qualified a little further back for Sunday’s race, starting fifth, but he was able to find his way quickly to the lead after the top-four got together. He wasn’t able to just cruise away, though, as he was forced to battle back and forth with Igor Fraga throughout the event en route to the win.

Now entering Mid-Ohio Sportscar Course, a solid string of finishes from here on out will see Kirkwood becoming the second straight Mazda Road to Indy Shootout winner to take home the series championship.

As for the secret to the success, he has no definite reasoning behind it.

“I honestly can’t answer that. If I told you, I’d be lying,” he said. “I know the car is amazing. Cape Motorsports has done an awesome job, and they’ve helped mentor me on the Mazda Road to Ind. I just try to take in as much knowledge as I can to get better.”