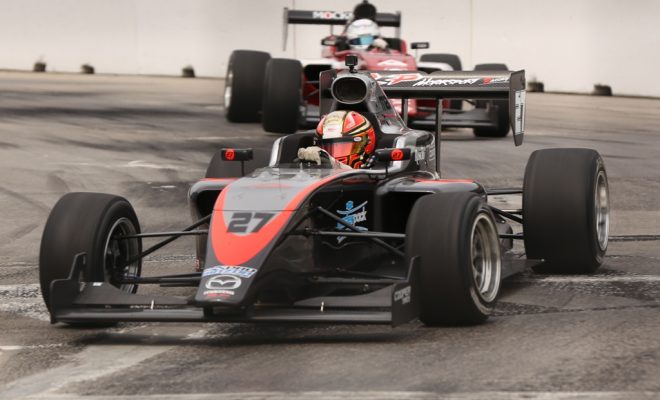 Raul Guzman Goes From Podium to Crashed at Honda Indy

TORONTO, Ontario — In racing, they always say to enjoy the highs when they fall your way as you never know how long they’re going to ask. Just ask Raul Guzman as it only lasted a single weekend for him.

Making his second start in the Pro Mazda Championship Presented by Cooper Tires, Guzman made it through the chaos with minimal damage to score a third-place finish on Saturday. The result surprised him considering how the event started.

“It’s great to finish P3,” he told POPULAR OPEN WHEEL. “On the first lap, I had contact and a car went on top of me on the front wing. It wasn’t that bad, so I just survived the race until the end.”

Unfortunately, he suffered a crash on Sunday when he got into turn 11 barrier, before being hit from behind by Andres Gutierrez.

Three races into his Pro Mazda career, Guzman stated that he’s happy with the state of the series, as well as the team that he is partnered with. Though whether that will translate into more races this season, he said it was “possible for sure” but could be a scheduling issue.

“For sure it’s in my plans for next year,” he added. “I need to do some things to make it happen, but yes it is.”