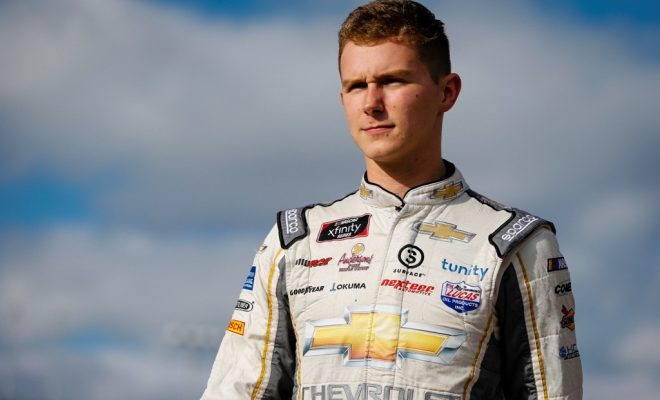 After placing sixth in the year-end XFINITY Series standings, Matt Tifft announced that he would drive a third entry for Front Row Motorsports in the Monster Energy NASCAR Cup Series in 2019. Recently, the 22-year-old spoke about the opportunity and more with POPULAR SPEED.

POPULAR SPEED: What are your thoughts on the opportunity with Front Row Motorsports?

MATT TIFFT: It’s definitely a dream come true to be running in the Cup Series; that’s something that I’m looking forward to since we’ve made the announcement. I look forward to being able to jump in the seat and be apart of the series and make the next step. it’s certainly a huge opportunity and it was a great 2018 season that led into this next chapter. I know I’ll have some great veteran teammates in David Ragan and Michael McDowell so really looking forward to it.

PS: I guess the big question is why do you feel at this time you’re ready to step up to the top level?

MATT: I think it was a timing thing. At the end of this season, we had a lot of runs where we were competing with the Cup guys in the XFINITY Series and performing well, and made another deep run into the playoffs. Really, for us, it came down to the timing of looking at the steps to get into the Cup Series. We weren’t looking at that at the beginning of the year as something we probably going to do because the opportunity wasn’t presented then.

But I think it makes sense with this new rules package to get in there. Everybody has a clean slate, and really I feel like going into Front Row Motorsports, they’re an up-and-coming team that has been getting better each year and I have some relationships there already. It kind of puts me in a comfortable spot going there. Obviously there will be some nerves going into my rookie year, but if you look at the last 12 or 15 races of the XFINITY Series season, we were competing with a lot of the good guys in the XFINITY Series that have been in the topic of drivers moving up for next year. For us, it just made sense to do it with the seats opening up and the timing just worked out perfectly to make the next jump.

PS: What are your goals and expectations?

MATT: I think the goal that’s kind of been put out is the rookie of the year race between myself, Ryan Preece, and Daniel Hemric. Judging off those guys, it’ll be a fun battle really, being teammates with each one of them before and it’s going to be cool to see how we all play out. With the new rules package, we don’t know where all the teams are going to shake out and being a mid-tier team in Front Row Motorsports, there’s a lot of potential upsides with the rule change.

Being realistic, I think we’re going to have a lot of days where I’m learning these longer races and how to manage them, but I think we’d like to target the top-20 in points and go after Rookie of the Year Award, and try to have a lot of good runs and earn the respect of other drivers. I’m not stupid; I know your first year in the Cup Series is a learning curve and there’s going to be things that are challenging as the year goes on. But I just need to be able to take that in, figure out teammates, and hopefully we all get better as the year goes on.

PS: What track are you looking forward to most?

MATT: I think going back to Martinsville. I haven’t ran there since the trucks a few years ago; that’s where I made my first truck series start. I’m excited to get back there. There’s so many other tracks on the schedule that the XFINITY Series does run, but I think going to Sonoma and Martinsville are probably the two I am looking forward to – especially Sonoma with the extended circuit now; I think that’ll be a fun challenge – just because I haven’t ran those two in awhile.

PS: Looking back on last year, what are your thoughts?

MATT: I thought it was a great season, especially the second half like I said. I felt like I gained a lot of confidence as a driver and improved through the second half and got into a good rhythm. Coming off a rookie year, you have to be able to take what you learned and get better and I felt like I was able to do that when we went back to tracks a second time. It was a really fun year for me working with RCR and that whole group.

It was probably one of the seasons that I have enjoyed the most in my career, and probably the best season of my career. So I’m coming off of that with a lot of confidence and hopefully that carries over to next year. I think it’s about honing on what I can do behind the wheel, and it was reassuring to have a great team with me that kind of got that confidence back in me.

PS: What is one track you wish was on the schedule that currently isn’t?

PS: If you were in charge of NASCAR for one day, what is one change you would make?

MATT: I would probably put someone else in charge. I don’t know if I’d want the responsibility as there’s way too many moving parts and people for me. I think I like my role as a driver as I love driving racecars, and that’s too much for me to handle.

PS: I remember it wasn’t long ago we were talking about brain surgery, and wondering what was next for you. Looking back on your journey as a whole and putting that in perspective, what does it mean to be at this point in your career?

MATT: Well, I think it’s really incredible for how far I’ve come from that. Even looking back on the 2017 season, there’s a lot of growth in there and it really took me until about halfway through that season to get back to feeling myself again off the track and that started to help me get better on the track again. There’s just a lot of changes and a lot of good things that has gone on since then.

I love the advocacy work that I’ve been able to do. I’ve gone to Capital Hill and talk to congressmen and congresswoman about policy changes, and more funding for brain tumor awareness and research, so that’s been really rewarding. Being given a clean bill of health has been amazing and I’ve been very fortunate to have that, and being able to continue on my career which is something that I wasn’t sure if I’d be able to do again.

Like I said before, doctors told me that I wouldn’t be able to drive a racecar again. So to be able to have the opportunity to go into the Cup Series and race in the Daytona 500, I don’t think I would’ve believed that in 2016 if you told me that was going to happen in 2019. Just very thankful for that and I know now and I’ve taken my health more seriously. I feel that’s helped me a lot not only on the racing side, but just the general health side. I feel that carries over to brain health and everything. It’s been a journey transitioning and trying to put the pieces together ever since then and the recovery process.