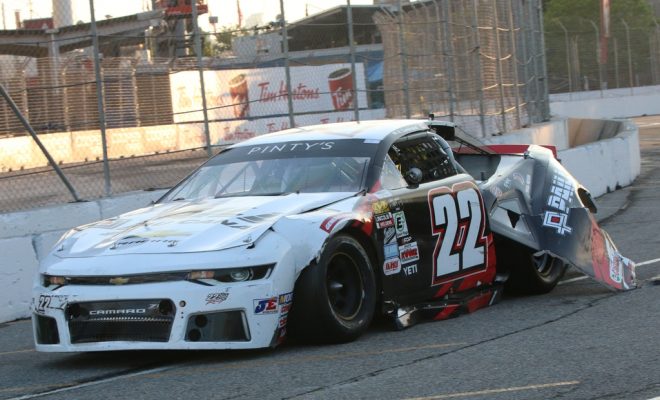 TORONTO, Ontario — Marc-Antoine Camirand was headed towards his first victory of the 2019 campaign – and then the crash happened.

Throughout the Pinty’s Grand Prix on the streets of Exhibition Place, Camirand ran inside the top-three, battling with fellow Quebec natives Alex Tagliani and Andrew Ranger.

A late race caution set-up a restart with three to go, which worked out in Camirand’s favor. He was able to get a good run into the first corner, putting the No. 22 GM Paille Chevrolet ahead of the field.

The same lap, though, as he headed into the back half of the course, things would not go as smoothly. He would make a mistake entering the turn eight corner, slamming the tire barriers, ripping the side off of his car as he went around.

Instead of visiting victory lane on Saturday evening, he was credited with a 16th-place finish.

“The car was really good,” he told POPULAR SPEED. “22 Racing gave me an awesome car. I feel bad because it’s solely my fault. I had a good restart on Alex and took the lead. Then after that, I just missed my braking point by a little bit and I lost it. It’s totally my fault, but I’ll take the blame on it and try to go out west and win them both.”

Unfortunately, Camirand has not started the 2019 NASCAR Pinty’s Series season as he wished, currently ranked 11th in the season-long standings following just a single top-10 in the first four races.

His next chance to visit victory lane with come as part of the double header in Saskatoon at Wyatt Group Raceway.