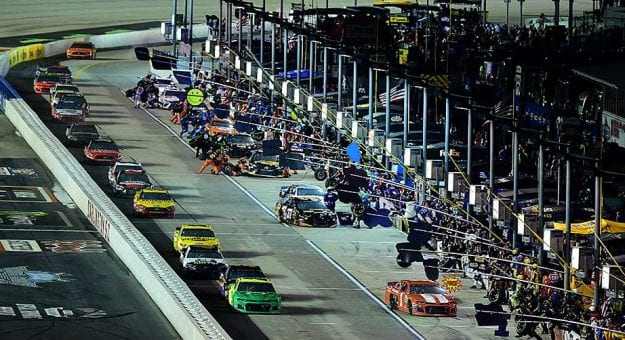 Three of the next four events on the revised NASCAR Cup Series schedule will be held without Busch Pole Qualifying to determine a starting lineup; only the Coca-Cola 600 on May 24 will include time trials to set the field. The decision was made to host multiple events without practice and limited qualifying to restrict exposure and at-track time for crews in the wake of the coronavirus health crisis.

When the series hosts its first event after the pandemic outbreak on May 17 at Darlington Raceway, the lineup will be determined in part by a random draw for starting positions:

The starting lineup for the next Cup Series event, scheduled May 20 at Darlington, will use the finishing order from May 17 as the basis for two inversions:

For the two NASCAR Cup Series events scheduled at Charlotte Motor Speedway, the starting lineup will be determined by:

Pit-selection for Charlotte events will be determined May 24 by qualifying and then May 27 by the results of Coca-Cola 600.

Modified competition caution process introduced for events with no practice

All three NASCAR national series will have a modified competition caution in the early portions of each race. Those stoppages will include freezing the field to accommodate longer pit stops, allowing teams to make more extended in-race adjustments that might normally be made during practice.

The competition cautions will occur at or around the following laps:

The Xfinity Series and Gander RV & Outdoors Truck Series will use random draws in part to determine starting lineups for their upcoming events without qualifying.

For the Xfinity Series’ May 19 event at Darlington and May 25 race at Charlotte:

Pit selection for the Xfinity Series race at Darlington will be based on qualifying from the series’ most recent race, at Phoenix Raceway, which gives the first selection to the Joe Gibbs Racing No. 54 Toyota.

The Gander RV & Outdoors Truck Series will use a similar system to determine the starting lineup for its May 26 return at Charlotte Motor Speedway. Teams will draw for starting position based on groups in team owner points:

The order of pit selection for the May 26 Gander Trucks event will be determined by the qualifying results from the series’ most recent race, Feb. 21 at Las Vegas Motor Speedway. That means the ThorSport Racing No. 13 Ford entry of Johnny Sauter will have the first selection.