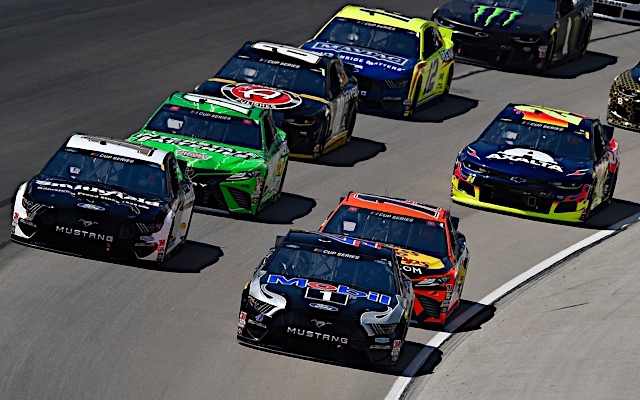 NASCAR officials announced Thursday that starting lineups and pit-stall selection will be determined using a competition-based formula, eliminating the random-draw element from all three national series through the end of the season.

The changes are set to take effect for the NASCAR tripleheader weekend scheduled Aug. 15-16 at the Daytona International Speedway Road Course.

The formula will use three performance metrics, which will be weighted and averaged to determine the lineup and pit selection order:

Since NASCAR returned to racing in May after a two-month shutdown because of the COVID-19 outbreak, only one race — the Cup Series’ Coca-Cola 600 — has been held with qualifying. Competition officials announced July 21 that racing would continue without pre-race practice or qualifying through the end of the year, a measure intended to limit at-track exposure for drivers, crew, safety personnel and officials.

In the majority of national series events since NASCAR’s May return, starting lineups have been set either by random draws according to groups ranked by team owner points or — in the case of consecutive events for a series at the same track — by an inversion of the top 20 finishers from the previous race. Pit stall selection had previously been determined by the finishing order from each series’ most recent race.

Scott Miller, NASCAR senior vice president of competition, said the new structure would draw on performance from both individual races and season-long results, rather than leaving a range of starting spots up to chance.

“We kind of consulted the playoff teams and then a few other ones as to what would be the best way to go,” Miller said. “We beat up several different things and feel really good where we landed. We feel like where we landed kind of serves both ends of the field — the perennial front-runners and then the rest of the cars still will have an opportunity to improve their starting spot. We feel like these metrics actually serve the field pretty well.”

Current rules that include the grouped random draw will remain in place for this weekend’s NASCAR Cup Series and Gander RV & Outdoors Truck Series events at Michigan International Speedway, plus the Xfinity Series’ Saturday visit to Road America. Miller said competition officials stressed the importance of implementing the new lineup formula before the playoffs began in each series, allowing some time for officials to make tweaks to the system as needed before each circuit decides its championship.

“We want the experience. We want the teams to get used to it,” Miller said. “Anything that we may need to slightly adjust, we would like to have all that fine-tuned by the time we get to the playoffs.”

The points standings for each series are reset at the start of the postseason and again after each round of the playoffs are completed. Therefore, those resets will keep championship-eligible drivers at the front of the field when the starting lineups are calculated in the playoffs.

The new procedure is just the latest shift in what’s been an unprecedented season of adaptation to hold races after the coronavirus outbreak. Competition officials and crew chiefs had previously held virtual meetings by teleconference for the starting lineup draws, and on-track time and team rosters have been streamlined in an effort to restrict the disease’s spread.

“It’s been a heck of an industry-wide cooperative effort to be able to get us here,” Miller said, acknowledging the flexibility of NASCAR’s partners to operate under pandemic conditions. “These changes, especially the lineup one, when we did the random draw thing in the beginning, we looked at that as temporary. I think we all looked at and hoped — had our fingers crossed — that COVID was going to be a short-term thing. Well, it’s turned out to be obviously quite the opposite of that. So leading into the playoffs, it was just apparent to us that the random draw thing had served us well, but the playoffs needed something different, for sure.”