The Unique Trophies of NASCAR Part 1

The Jukebox. The Guitar. A Boat. The Sword. A Statue of a Monster. The Grandfather Clock.

Through the history of NASCAR, there have been several unique trophies given out through the years to various drivers for their victories and success. That’s why NEWS FROM THE PITS reached out to a select bunch of competitors to see what’s the most unique in their collection.

“For me, probably the most unique trophy I have is the Miles the Monster trophy and not only because it was that, but because it was the 50th year when I won, so I got a gold trophy out of it.  That was the year I think everybody wanted to win.  Everybody wants to win at Dover anyways because of the Monster Mile trophy, but that year was pretty special and we were lucky enough to win that race.” 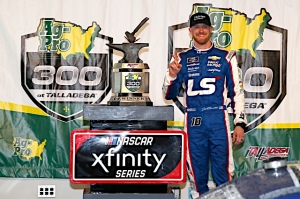 “The Talladega trophy is my favorite so far. It’s pretty cool since it was from my first Xfinity win. It means a lot.”

“I would say my favorite trophy would have to be my Talladega trophies, just because I have a few of them in my collection! Each one has meant a lot and will always be special.”

“My favorite trophy would have to be the Rolex – because it’s a Rolex watch! Not only that, but the people that I won it with meant more to me than the actual race win.” 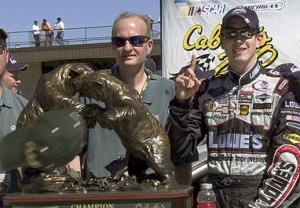 “There’s a lot of unique trophies, but one of the memorable ones was a Cabela’s trophy I won in a Busch Series race back in the Hendrick days. I think it was 2004. It’s a huge trophy with two bears and I have no idea how much it weights, but it’s heavy. We have a lot of trophies all over KBM, but also the trophy case with just the Bristol trophies is cool since I’ve had so much success there.  The two Cup Series Championship trophies are also really special as well for obvious reasons.”

“I think that the no-brainer for me for the most special trophy I’ve ever earned and been a recipient of was the Daytona 500 in 2008, the 50th running.  I have the one and only — when I say the one and only there’s a replica made for the team owner and what-not — but the original, the one and only given in victory lane gold Harley J. Earl Trophy and that commemorates the 50th running of the 500.  So that will always be, I don’t know that there’s anything that could be more special than that.  I mean, even a Cup championship trophy.  I wouldn’t think that has the significance of 50 years of the sport and the people that I’ve followed as a driver and as a fan before I was ever my own race car driver in NASCAR, so that.  The Brickyard 400 was really special just because I’m from Indiana and the yard of bricks and the brick that comes on the trophy, and then I always keep my second-place finish in the 2014 championship.  That was just a significant race because it was one race.  We were so close.  We got beat, but we gave it 100 percent and we got 100 percent, we just didn’t have enough.”

Stay tuned for the second part where we ask the drivers which trophies they would like to add to their collection.