The No. 55 Repeats at the Sahlen’s Six Hours, then Runs out of Fuel

WATKINS GLEN, N.Y. – Getting a lift to the pits in a safety car usually isn’t a good sign for a racecar driver. In Harry Tincknell’s case on Sunday, it was pure joy.

Tincknell won the Sahlen’s Six Hours of The Glen at Watkins Glen International with a car so low on fuel that it ran dry on the cool-down lap, leaving Tincknell to wait for a ride to victory lane to greet co-drivers Oliver Jarvis and Jonathan Bomarito.

He’s been driven back to the pits after a race, Tincknell said, but never after winning.

Tincknell and the Mazda Motorsports strategists used a short fill in the pits during a pit stop under caution with 50 minutes left in the six-hour race to take the lead. That let his No. 55 Mazda Motorsports Mazda DPi RT24-P pass Olivier Pla, who had built a 15-second lead before the caution in the No. 60 Meyer Shank Racing with Curb-Agajanian Acura ARX-05 that he shared with Dane Cameron.

Knowing he was dangerously low on fuel, Tincknell tried to save as much as possible while staying ahead of Pla, a former Mazda teammate who won the 2019 Sahlen’s Six Hours of The Glen with Tincknell and Bomarito in 2019.

Tincknell managed to hit the required fuel numbers and reached the finish line 0.965 seconds ahead of Pla. He made it a few more turns around the 3.4-mile circuit before the Mazda coughed to a stop, its fuel tank dry. Tincknell applauded the work of the engineers and strategists atop the No. 55’s pit box, who calculated it right down to the last drop.

“They had their numbers absolutely spot on,” Tincknell said. “To be honest, a perfect race car is the one that crosses the line and then breaks down. They did a fantastic job there.”

The victory pushed Tincknell and Jarvis closer to season points leaders Ricky Taylor and Filipe Albuquerque, who finished third Sunday with Alexander Rossi in the No. 10 Wayne Taylor Racing Acura. Tincknell and Jarvis are now 31 points behind Taylor and Albuquerque after the fifth of 10 IMSA WeatherTech SportsCar Championship races for the Daytona Prototype International (DPi) class.

“I had the call on the last lap to go flat-out,” Tincknell said. “I knew at that point we should be OK. The team calculated it perfectly for the last lap, but they forgot about the in lap, so I ran out of fuel in Turn 7. It was quite a cool moment, all of us being pushed into victory lane.”

Nunez – who finished second in the Sahlen’s Six Hours of The Glen alongside then-co-driver Jarvis in a 1-2 sweep for Mazda two years ago – led the final laps in the No. 11 WIN Autosport ORECA LMP2 07, beating Mikkel Jensen and the No. 52 PR1 Mathiasen Motorsports ORECA he shared with Ben Keating and Scott Huffaker to the finish line by 1.139 seconds. Nunez, Merrill and Thomas closed within two points of Jensen, Keating and Huffaker in the LMP2 driver standings.

“That was the hardest race I’ve ever had in my career,” said Nunez, who recorded the seventh IMSA win of his career and second at WGI. “Jensen was definitely driving an amazing race. There definitely was a little bit of fuel saving. … It was tough out there, especially with all the traffic.” 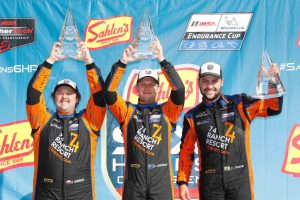 Meanwhile, Felipe Fraga held onto the lead in Le Mans Prototype 3 (LMP3) to win in the No. 74 Riley Motorsports Ligier JS P320 with teammates Scott Andrews and Gar Robinson, the latter extending his lead in the LMP3 driver standings to 50 points over Colin Braun and Jonathan Bennett with the victory.

Fraga said he knew Braun’s car was faster than his before the final pit stop, but he was able to slice through traffic while saving fuel to prevail.

“When I got the yellow flag, I was a bit worried with him behind me,” Fraga said. “But thanks to the team. They did an adjustment on the tires for the last stint. I think that helped me. We were also really good in traffic at the end.”

So, too, was Tincknell, who estimated he had the throttle at 80-85 percent during the final laps. In the end, leaving a stranded car at the side of the road and hitchhiking back to the pits wasn’t a bad way to end the day.

“We didn’t test here, and we started the weekend off on the back foot,” Tincknell said. “We just got better and better all weekend. Every session, we learned. Even if we weren’t at the top of the time sheets, we learned the direction we needed to go. The race car we put down today for the Six Hours was on a par with the top runners, which gave us a shot. It was a classic team effort.”

The WeatherTech Championship resumes Friday with the IMSA WeatherTech 240 at The Glen. NBCSN’s live broadcast begins at 6 p.m. ET.