LONDON, Ontario — After a rocky NASCAR Pinty’s Series season, Pete Shepherd was able to end it on a high with a podium finish at Delaware Speedway.

“It was a good recovery run for how kind of the rest of the things went in the NASCAR Pinty’s Series all year,” he told NEWS FROM THE PITS. “It was a good to close out the podium year with a solid run.” 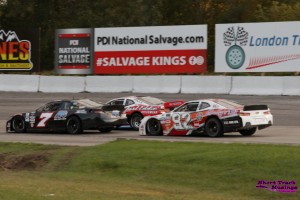 The weekend did not start off smoothly, with Shepherd tearing the front end off in the Canadian Tire 125 on Friday night. He unloaded the back-up car for Sunday’s double header, running into issues during the first event.

“We ended up having some fuel related troubles in the first race – had a misfire, and punctured the inside of a tire with a piece of the racecar rubbing on it,” he explained. “It tore the side wall out of it, but once we sorted it out for the second race, we started near the back and had a good racecar and was very, very patient to save tires. I think we had a lot of top speed, but on old tires, we were good, and I guess we were just good enough to salvage a third-place finish.”

Shepherd felt he had a good enough car to possibly win the event, but was unable to get a good restart to capitalize on his “big massive plan.”

“I don’t think we were missing anything,” he continued. “On that run, I felt the 74 (Kevin Lacroix) was probably the best car. Andrew (Ranger) was probably better than me 20 laps prior  to the caution but the last 10 laps, I was all over him trying to make a move. I think if we would’ve went green for a couple more laps, we would’ve gotten by him there. But the yellow came out and that put us third for the restart.

“I thought the 74 might’ve been the best car. I thought he may have gotten into turn one a little hot which is easy to do when the track is greasy like that, and overshot it a little bit and Andrew got underneath him. The short run, you have grip in them for a lap or two, but then that goes away quick. So I think we were in the mix there and didn’t have a whole lot of speed, but were as good as anybody on old tires and just got a bad restart. That cost me for that shot there at the end.”

The Delaware Speedway weekend in a nut shell sums up how the rest of the year has gone. Shepherd showed speed behind the wheel of his Jacombs Racing prepared No. 7 APC Canusa entry at Sunset Speedway, calling the brand new racecar “an absolute rocket.” However, he ultimately only had a 12th and 13th to show for it when the weekend was done following incidents in both races.

“I know Treyten (Lapcevich) was fast, and Raphael was fast, but lots of contact, hard racing – Raphael (Lessard) and myself were racing each other very hard and I came up on the bitter end of that,” he recalled. “That was disappointing result that night, but not disappointed as a whole with a pole and speed both races.”

The bad luck followed him to Flamboro Speedway, as he would wreck the primary car in practice. The team worked hard, though, unloading the back-up to salvage a fifth-place finish.

Despite things not going as warranted, there’s a possibility Shepherd will return back to the series in 2022. He says it depends on what the off-season conversations consist of.

“Everything that I did this year was through APC and Canusa and I can’t thank them enough for everything, so we will see,” he commented. “All that stuff is all up in the air. There’s discussions to be had. like I said, it was a busy schedule for me as there was more racing than I had done in a long time. “