LONDON, Ontario —Despite being only his second weekend behind the wheel of a NASCAR Pinty’s Series car, Brandon Watson proved he can run with the best in the series, battling for the win and pacing laps.

“I think overall it was a good day for us,” he told NEWS FROM THE PITS. “The Leland Wright Motorsports No. 64 car was fast all day Sunday. I think we had a good enough car to win the first race, but unfortunately, that was a little bit of a bad luck. It just wasn’t our day to win.” 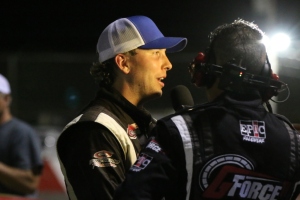 Watson showed speed throughout the duration of the Qwick Wick 125, spending the entire event inside the top-five. Although he took the lead initially at Lap 118, a caution for a spin forced him to restart on the outside. Unfortunately, a pair of late race yellow flags took away his chance to capitalize, crossing the finish line with a runner-up.

“He left earlier than they usually do, which is a smart move, but just couldn’t keep up on the outside to get by him and couldn’t back behind him so just ran out of time to get back in front of him before the race was overall,” he commented. “It was little unfortunate for us, but second place is still a good showing for us.”

Even though he came up short, he felt they had the fastest car in that event, but circumstances did not play out as warranted.

“I think we had a faster car than the 17 (DJ Kennington), but just couldn’t get what we needed to get the race win there,” he added. “Fortunately, we did make the pass so we had the faster car. We knew he was getting loose so we were trying to wheel that thing to get past him clean and able to clear him by a car length – but it was just not our time as the caution came out.”

The confidence carried over to the second event as he tried to make his way forward after falling back a couple spots on the initial start. However, a spin at Lap 16 sent the No. 64 Leland Industries / NTN Bearings / RGC Sports entry to the tail of the field. 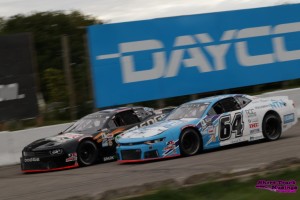 “We got turned around – the car just got a little loose, unfortunately we took another car with us too,” Watson said. “We lost some spots there, had to go to the back, but we were working our way back up.”

Watson was able to work his way through the traffic all the way up to third, but faded back to sixth in lap traffic. He was then able to battle back for a fourth by the checkered flag.

“I believe we may have used a little bit too much, but we got up to third and the lap cars were kind of a bit tough for us there in the second race,” he commented. “We had lap cars running down the middle of the track and not picking a lane so kind of got taken out a bit with a lap car with about 50 to go to shuffle us back to sixth.

“We had just gotten by them just to allow them to get back by us again, which is kind of a little frustrating. They need to decide which lane to go into, but it is what it is. We made it back up to fourth to finish the second race.”

In total, Watson was able to score a pair of top-five’s at Delaware, and a sixth at Flamboro across his first four starts in the series.

“It’s definitely a fun series to run in; they’re fun cars,” he commented. “Obviously they’re different than what I’m used to racing. A little bit heavier, definitely got more power, but still fun to drive. A little bit faster on the straightaway especially on the big tracks, especially fun at Delaware.

“We’re looking at some options,” he said. “It’d be fun to see if we can get something going for the years to come. It’s definitely in the back of our heads to run a full-time series here. They’re a lot of fun to drive and it’s good to do something different.

“APC has been a lot of fun, but we’ll just have to see how it goes and play it by ear. We’ll see throughout the winter what comes up and go from there.”