After a solid rookie campaign with seven top-five’s including four podiums, Danial Frost returns to the Indy Lights Presented by Cooper Tires for 2022, though with a different team. Making the switch from Andretti Autosport to HMD Motorsports, the Singapore-born driver shared his thoughts with NEWS FROM THE PITS.

ASHLEY MCCUBBIN: What are your thoughts going into next season with HMD Motorsports?

DANIAL FROST: My thoughts are just to win. That’s been on my mind for the whole off-season. I’m very excited for my new team, HMD Motorsports. I think we’re both having a very good chemistry together, for example, my engineer and I are doing very good together. and over the off-season, we’ve been doing a very good job to understand each other to be very prepared. St. Petersburg is just around the corner, so we have to push as hard as we can to be as prepared as we can to be one-step ahead of all the other guys.

ASHLEY: You came close to scoring your first win last season. What would it mean to you to score that first win?

DANIAL: We’ve been very close three times last year. Been denied by that by my very nice teammate. I think we’re definitely set o break through that this year, and hopefully it will come sooner than expected. It’ll just give us more momentum and we’ll be able to push further. Once we get that first win, it becomes easier to get the second, and third following. I think it’s just that first break through where we have to push ourselves to make that happen very soon.

ASHLEY: With a season of Indy Lights under your belt, what do you feel that you need to do improve upon?

DANIAL: As a driver, I would say my consistency to be at the front every single round. There were some big mistakes that we made which prevented us from doing that last year, but I think we’ve overcome that issue and over this off-season, I’ve been really looking into why I’ve been not able to at the front with the other guys every single weekend. I think we’ve kind of now established what the problem is, so I think that will now be the biggest thing and to always be competitive every single weekend will matter for the whole season, really.

ASHLEY: What surprised you most about the Indy Lights cars in ’21?

DANIAL: I think just by being bigger, faster, it’s completely different to the Indy Pro. We have wider tires for example, and we have more power and there’s more aero so we have to be, for me at least, I have to be more confident to throw more speed into the corners and knowing the car will hook up even though I feel like it wouldn’t. I feel that’s one of the biggest differences between the current car and the old car, and with a season under my belt, over a whole season, I have a very good idea of what the car is going to do at each circuit and how it will act.

Every time we went into a weekend, I know what to expect; I’m not going there blind now. There’s only one next track called Iowa (Speedway) which is the oval; that’s a new track for me, but I think that’s the same for everyone. I think we’re all in the same boat so it won’t hurt us in that point of view. But we’re just going to have push ourselves as much as we can to do good.

ASHLEY: Speaking of the tracks on the schedule, What track are you most excited to get to?

DANIAL: Actually, I’m most exited for St. Pete. It’s the only track that I really enjoy for street circuits. It just feels very, very flowy and connected. The middle sector where you have the full sequence where you go left, double right, that part of the track is very complicated and to be precise every single lap is very difficult, but if you’re able to master that, you’re going to be quick for the rest of the track.

I think that’s a challenging track where you have to be close to the walls, and it kind of suits me really well. I’m the type of guy that likes to be close to the walls and have to push the car through there so St. Pete is one of the tracks that I enjoy most, and it’s the start of the season. That’s where I like to start off strong with.

ASHLEY: Speaking of getting started, how did you get started in racing?

DANIAL: I actually started in Singapore. I did some go-karting there back in 2014 and did go-karting for two years. I won two championships there and decided it was maybe time to move up, take it to the next level. I moved up to Formula FEA – Formula South East Asia, which is really boost up my career. From then on, we moved up and somehow we ended up in the U.S. 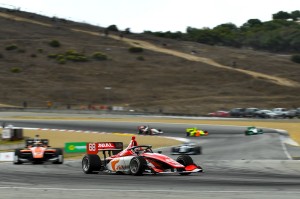 ASHLEY: The go-kart experience. We see a lot of young kids getting involved in go-karts. What did you learn during that experience that has been beneficial for you now?

DANIAL: Go-karting is the foundation of racing, really. That’s where everyone starts off their racing career, well, most people, just because it teaches you how to drive a car really and teaches you the race craft, the experience of how to race other people, and really, driving a bigger car is the same thing as a go-kart – just bigger. I think that’s where everyone should start their career at and it’s taught me a lot of things in that small period of times before I moved up in what I needed to do drive a racecar.

ASHLEY: Who would you consider your racing hero?

DANIAL: (Lewis) Hamilton. I know it’s a very genetic answer, but I enjoy watching him on-track and how he performs and how he’s on top of his game at his age, and the fact that he has won seven championships really shows his potential and what he’s achieved in the sport. That’s the kind of guy that I idolize. I just like the way he has styled and portrayed himself over the past few years. He’s not a guy to back down from winning.

ASHLEY: Fun fact time. What is something that fans may not know about you that they’d be surprised to know?

DANIAL: I think a lot of people already know this, but I bring a cat every single weekend. I have three cats. We swap them out, give them chances to come to the race track. We share them so everyone else can see them because Bengal bred so they’re not seen every day, and I think the funnest thing is we walk them.