No matter what race he enters across the country in any series, Matt Hirschman is always a threat to take the checkered flag and score the victory, an occurrence that has happened over 200 times to date.

News From The Pits recently caught up with the Pennsylvania native to discuss his success, plans for 2023, and what drives him to continue after over 20 years behind the wheel.

Click here if you missed the first part of the interview.

ASHLEY MCCUBBIN: With all the success that you’ve had over the years, what’s the motivation to continue to push to have more success?

MATT HIRSCHMAN: Just being driven to win races. The competition is something that drives me to keep doing this. I feel like I’m as dedicated to this as I’ve ever been and trying to win races. There was never a goal of a certain amount of wins, or anything like that. every race we go to, it doesn’t matter if it is local here in Pennsylvania, or we’re going against the Whelen Modified Tour, TriTrack, Race of Champions, the SMART Tour, wherever we go, the goal is the same and that’s to win.

That’s the objective to me – to win, and we go there and try our best to accomplish that goal and we don’t always win, but we’ve been very fortunate that a lot of times we do. That’s just hard work and dedication, and a passion to try and succeed.

ASHLEY: How did you get started in the modifieds to begin with?

MATT: Well my dad raced modifieds. My dad is an all-time great in the modifieds. He won five NASCAR Modified Championships, won the Race of Champions multiple times. For the majority of his career, he has raced in the modifieds. Briefly, he raced in the Busch North Series and even when there was combination events between the Busch North and South for a little bit, but that was only a few year period in his career. The majority of the time, and all of his NASCAR Championships, came after dabbling in that.

So I grew up in the sport going to races with him, and I didn’t start driving myself until I was 17 and I won my first race when I was 18. I started right in the modifieds, which is a little odd or unique you could say because most of the time, you work your way up to the modifieds. I just had an opportunity to try it and did a little bit in 2000, just a few races, kind of got my feet wet. Then I worked through the winter rebuilding a car to try and come out to race – not a full season in 2001 but race more, and like I said, it was that summer that I won my first race.

At the end of that year, I won the season ending race at Evergreen Raceway in Pennsylvania, which is still known today as the King of the Green. It’s still held annually as their season-ending event and I was able to win that at 18 years old and in my first real full season of running, and just progressed from there. I just started venturing out and racing on the Race of the Champions series, eventually the Whelen Modified Series. In recent years, the TriTrack was formed and we’ve been the most recent winner there and then still competing in the special events at Evergreen. 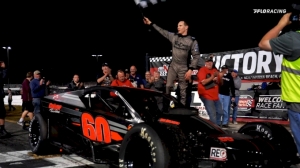 It’s just snowballed from where it started as, and I got to race a ton with my dad, but when I first started and was a rookie on the Whelen tour, he was performing at the highest level and winning races and championship. I was very young and inexperienced, so there was very little overlap of our careers. It wasn’t long after that he started winding down his career and stopped racing, and I just continued to progress. We really didn’t race against each other head-to-head a whole lot, but we got to do that a whole lot. His influence just being as a kid going to all of his races and traveling as a family, and that is what got me interested in doing this.

It also got my brother involved in the sport, and today he’s the spotter for Kyle Busch in NASCAR. That started for him by going to the races to follow my dad, and then eventually spotting for him and progressed from there. He’s made a career in motorsports as well, not behind the wheel, but as a spotter.

ASHLEY: So what makes the modifieds so much fun, what’s the appeal that you have now stuck with this division for now over 20 years?

MATT: I mean,  I just think our cars are some of the baddest racecars and put on the best show, especially on asphalt. The Super Modifieds are pretty unique and fast, and then on dirt, you have sprint cars and things like that. I just think our cars are one of the most unique cars to watch, and we put on some excellent racing. Being for example the World Series, I don’t say this like I’m trying to insult any of the other classes, but at New Smyrna, the World Series, we’re the best show in town.

They run Late Model classes, they have their Florida Modifieds, and all kinds of other stuff that runs there. The ARCA cars run there, but nothing compares. There’s nothing that puts on a better show than our cars do, and the competition level is just incredible really. The amount of talent, teams, and the people that are involved in modified racing – and even the car count. We blew everyone else there in terms of that as well with 30-something, getting into the 40s as far as car count.

They’re called the ground pounders – there’s just a lot about them that is not like anything else, and that seems to be why people come to see us. 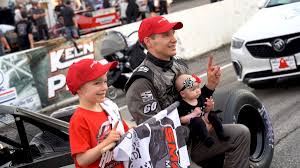 ASHLEY: Looking at the next crop of drivers coming into the sport, what would be one piece of advice to pass along to them?

MATT: It’s hard to really answer. With any sport, it’s what you put into it that you get back out in terms of results. It’s definitely a lot of hard work that pay will off, and also in just in terms of drivers, learn from your mistakes. I made mistakes when I first started, but I also believe that I never made the same mistake twice. It was something that you did that you wrecked a car, or you did something that you made a mistake, or bad judgment, I’ve always just tried to learn from every mistake and not make it again.

It’s so hard to teach this. Even going back to this in speaking about my dad, it’s very hard to teach. You learn so much from experiencing; you have to learn that on your own a lot of times. There’s no real thing or advice that you can give and you’re going to get the same results as what I got, or what my dad got, or whatever. A lot of it is you have to learn on your own and continue to work at it.