BOWMANVILLE, Ontario – The plaid Pfaff Porsche finished the race where it started – at the head of the class.

In the Canadian team’s return to its home track, Pfaff Motorsports extended its points lead in GTD PRO with a nearly perfect flag-to-flag victory by Mathieu Jaminet and Matt Campbell in the No. 9 Porsche 911 GT3R.

Jaminet, who won the Motul Pole Award on Saturday, started Sunday’s Chevrolet Grand Prix at Canadian Tire Motorsport Park up front. He surrendered the lead briefly with 1 hour 6 minutes left in the two-hour 40-minute race when he pitted after a 53-lap stint. Not long after, the No. 9 Porsche was back in front.

“It’s extremely special,” Campbell said. “To come away with a victory like that is super special. (The team) put so much effort and work into this one race. We’ve had so many supporters and fans here this weekend. It’s been fantastic to see.”

After Jaminet’s stop, Campbell took over and brought the No. 9 to the line 1.434 seconds ahead of the No. 3 Corvette Racing Chevrolet Corvette C8.R GTD co-driven by Jordan Taylor and Antonio Garcia.

While it may have looked simple, Jaminet said, it was anything but.

“It wasn’t easy, not at all,” he said. “Luckily it worked out. Starting up front was one of the keys today. Amazing job from the boys.”

Jaminet, Campbell and the Pfaff crew never faltered, even as the No. 3 Corvette and the No. 23 Heart of Racing Team Aston Martin Vantage GT3 co-driven by Alex Riberas and Ross Gunn challenged valiantly. At times midway through the race, the three cars were separated by less than a second.

“It was tough,” Jaminet said. “The car was hard to drive, but in the end, we managed to keep everybody behind.”

After Campbell replaced Jaminet, Ben Barnicoat, who was off pit sequence in the No. 14 Vasser Sullivan Lexus RC F GT3, led the GTD PRO class. When Barnicoat pitted under caution with 59 minutes left, Campbell regained the lead for the No. 9, then held off Garcia’s attempts to pass him.

“I could see he was pushing all the time, and I could see where he was starting to look at places if he was close on the restarts and such,” Campbell said. “I could see where the car was strong, but I always wanted to make sure I had a little bit of a buffer and gap going into those places.

“I was just trying to manage the tires. It wasn’t easy up there to be able to keep him off, especially at the end of the race, but we got there in the end.” 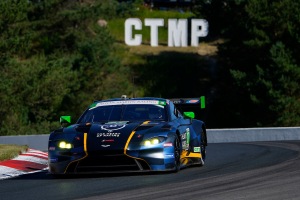 For Roman De Angelis, Maxime Martin and the No. 27 Heart of Racing Aston Martin Vantage GT3, the first sign things were going their way came in Turn 1 on the opening lap.

That’s when the pole-sitting GT Daytona (GTD) No. 12 Lexus RC F GT3 was collected by the spinning No. 33 Sean Creech Motorsport Le Mans Prototype 3 (LMP3). The Lexus sustained significant damage, forcing lengthy repairs that ended in a last-place finish in the GTD class.

The No. 12’s misfortune opened the door for De Angelis, Martin and the No. 27 Aston Martin that started second in class to forge ahead and win the GTD race. But not without drama. Martin had Philip Ellis in the No. 57 Winward Racing Mercedes-AMG GT3 on his bumper over the final hour, the margin of victory but 0.493 seconds.

“It was very tough. The Mercedes was quite big in my mirrors, for sure,” Martin said after the Belgian took home the third win of his IMSA career. “At the end, it was really close. The Mercedes behind was so fast, but a win is a win; we’ll take it. It’s fantastic for the whole team.”

Ellis, racing for the first time at CTMP, gave it his all but couldn’t find a way past the Aston Martin.

“It’s a very flowing track but as it’s so flowing it’s super hard to overtake as well,” Ellis said. “I feel like I could have had a little bit of pace on the Aston in front. I wasn’t really close enough to put a dive on him or make a move on him, so I basically had to wait and try to pressure him into a mistake, but Maxime never did. Have to be happy with P2 this time.”

The No. 27’s win gives the team back-to-back victories on consecutive weekends following their June 26 triumph in the Sahlen’s Six Hours of The Glen. Sunday’s race awarded points only for the IMSA WeatherTech Sprint Cup and not the overall season championship, but it didn’t lessen the sweetness for De Angelis and Martin.

“Definitely special to win here,” said De Angelis, a five-time WeatherTech Championship race winner who hails from Windsor, Ontario, and considers CTMP and Detroit his home tracks. “I’ve done a lot of racing here in the past but obviously to win here in Canada the first time back with IMSA is pretty special. Amazing job by the team, amazing job by my teammate and good strategy all weekend.

“We’ve had a good string of results after some bad ones in the beginning, so definitely clawing our way back. We’ve had two really strong tracks that we knew we’d be competitive at, so we tried to take advantage of it.”

The GT classes are in action at Lime Rock Park July 15-16 for the FCP Euro Northeast Grand Prix.