The theme of each NASCAR Silly Season is figuring out what the changes will be, so that way you can find the ride that your favourite driver(s) is(are) behind the wheel of. It’s why News From The Pits is here to help you sort through it all.

Following the name change for DGR-Crosley Racing to TRICON Garage as discussed in the first part, they continue to solidify their line-up in announcing William Sawalich will run six races with the team in 2023. There are going to be a lot of people interested in to see how he does, based simply on his late model success to date. His list of accomplishments from last year include six victories in CARS Tour Pro Late Model action, three late model stock wins, and two Southern Super Series wins among others. This also is the perfect campaign alongside running 20 ARCA races for Joe Gibbs Racing as he continues to move up the development ladder with Toyota Racing Development (TRD).

With Deegan moving over to ThorSport Racing and the others returning, it puts Christian Eckes on the sidelines looking for a ride following eight top-five’s and 15 top-10’s compared to Ben Rhodes’ championship bid. While it was most consistency than the previous year, a lack of victory in contrast to his teammates probably played a factor. He will remain in the series, replacing Derek Kraus at McAnally-Hilgemann Racing.

There has been potential shown by both Kraus and MHR, but just four top-five’s across three four seasons have a lot of people wondering about both driver and equipment. Perhaps the experience Eckes brings from spending time at Kyle Busch Motorsports (KBM) and ThorSport could be beneficial for the organization. However, if a driver goes from team to team multiple years in a row, that has other questions attached.

Eckes will have a teammate, in the form of late model standout Jake Garcia, who has been building his notebook of experience over the past year. He placed sixth in his ARCA Menards Series West debut last season, and scored a best finish of 16th in five Truck Series appearances. A full-time gig will give him a chance to continue building the notebook and experience, and given the raw speed shown at times, a string of top-15’s with a couple top-10’s is in the cards.

That said, Garcia is not approved to run the season-opener at Daytona International Speedway due to not being 18-years-old. The team announced fellow Georgian Chase Elliott will compete in that event for them. No doubt feedback from the 2020 NASCAR Cup Series Champion should be beneficial for them.

It seems all the big teams in the series are going through changes, as GMS Racing has made a driver change for the 2023 campaign. When you have others in the series winning races and contending for titles, no top-10’s at all certainly make your seat a target. That was the case for Jack Wood, as he will not return to the organization in 2023. Instead, the No. 24 Chevrolet Silverado will be driven by Rajah Caruth. The Drive for Diversity driver brings a lot of interest to see what potential he has, after placing third in the ARCA Menards Series standings with eight top-five finishes. 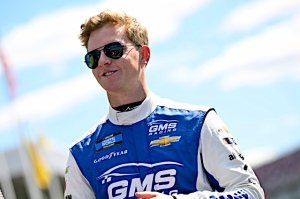 Jack Wood will remain in the series, getting a second chance as he runs a partial schedule with Kyle Busch Motorsports. Perhaps being surrounded by veteran leadership will allow him to find his footing and the performance that was expected. Otherwise, he could find himself on the sidelines quite quickly.

After scoring a single top-10 finish with six different drivers last season, On Point Motorsports will hope to find the same groove that led them to a top-five with Brennan Poole in 2019. Ryan Vargas has been appointed the role on a part-time basis, continuing to fill his plate alongside an Xfinity Series schedule. It will mark his first appearance in the series following two top-10’s in 67 NASCAR Xfinity Series appearances. A string of solid top-20’s for his foray would be a good solid goal.

If you want to cheer for an underdog that may take a small team to a couple big successes, Mason Massey may be the man for the job. After scoring a pair of top-10’s with DGM Racing in the Xfinity Series, he gets the full-time Truck Series gig with Reaume Brothers Racing in 2023. The Georgian ran seven events with the team in 2019, scoring a pair of top-20 finishes – which gives good potential in what may be ahead this time around.

The pieces so far……

Stay tuned for the third part of the series as we digest more of what is to come in 2023.