Throughout the entire week leading into the Rolex 24 Hours of Daytona, plenty of drivers emphasized the biggest challenge of winning the event was making it to the final minutes in position to pounce. However, a glance at the first four hours and you’d think that was thrown out the window.

In a class of seven Daytona Protypes, five of them found themselves under a blanket with drivers swapping positions and lanes as they looked to get the advantage on one another. Some of the moves had you believing it was the final laps in seeing the chances they would take around slower vehicles in hopes of out-maneuvering their competition.

“I was surprised I have to say,” Kevin Magnussen told POPULAR SPEED. “I don’t think that made a lot of sense with people banging wheels around with the GTs on Lap 5, 6, 7 and really racing each other super hard. I had a bit of a race out there with the No, 10 car and it wasn’t easy to overtake him; he was certainly keeping the fight alive, but that’s fair enough. We can deal with that.” 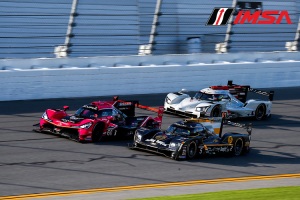 Dane Cameron admitted he had fun through the “pretty feisty” start there, recognizing it usually happens due to the importance of clean air and aerodynamics.

“You usually are a little bit, but it was all fair and pretty good – I don’t think there was any touching between everybody,” he commented. “These prototypes, they’re so downforce sensitive as you want to see them up front and in the clean air so it’s working. I think that’s what you’re seeing in everybody wanting be up front, and it can be difficult to be make clean passes. So you want to get space before traffic, so if there’s an opportunity, you’re going to take it. All fair battles to start the race.”

The competition certainly created conversation across social media, and it really opens your eyes to seeing what could be possible if there’s a handful of cars still in contention come Sunday afternoon. After all, it has been recognized as one of the most competitive fields with strong drivers in each of the entries.

“It sounds like a cliché to say it’s anybody’s race as everybody says that every year, but you have your eyes on every single car,” Ricky Taylor explained. “We’re in the same equipment as the Meyer Shank team with their Acura and we were lucky to have a couple years without the (No.) 01 car here so our lives got a little easier but coming back, you know they’ll be a contender. Seeing (Chip) Ganassi back in the field, you know they’re going to force everybody to raise their game especially with that driver line-up.

“You just continue to look through the field. Mazda is always going to be a contender; they’ve been clicking – the last year they had some good race wins. It’s just you can’t count anybody out and you have to be there at the end. that’s the only thing – people are taking a lot of risk at the moment where we’re trying to bide our time and make sure we’re there to beat the guys left.

“They’re very well could be five or six cars left at the end of this and it’s going to be s crap. If the first four hours were any indication of how everybody will be, the last four hours are going to be insane.”