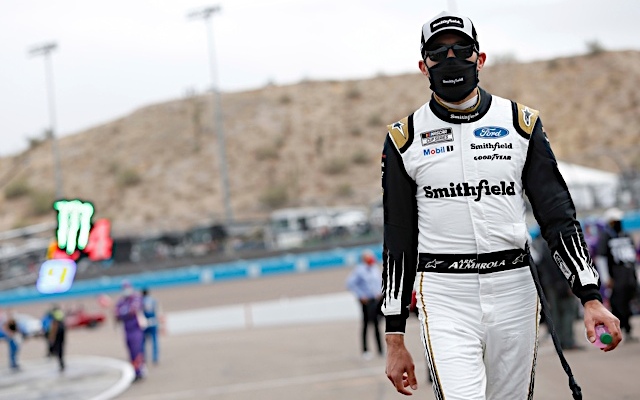 Despite Stewart-Haas Racing visiting victory lane on multiple occasions over the past few years, Aric Almirola has not gotten the opportunity to do the same since winning at Talladega Superspeedway in 2018.

In the fight to get another win, the driver of the No. 10 Smithfield Ford Mustang fast fast cars, and executing well is the key.

“I know you probably hear that from 39 other drivers, but it’s true,” he told NEWS FROM THE PITS. “All of the little details matter and I’ve got to do my part in the race car from hitting my marks and finding the most grip and the most speed on the racetrack, doing a good job on restarts and gaining more spots than I lose.

If Almirola is to score a victory in 2021, it could very well happen at one of the two superspeedway tracks, as evident with his previous pair of wins. He has been part of the conversation for the win each season, scoring eight consecutive top-10’s at Talladega before a 37th-place finish last fall. At Daytona International Speedway, he has not been as strong with just two top-10’s since winning in the July event in 2014.

To be strong on the restrictor plate tracks, Almirola feels the key is not only having a fast racecar, but a great spotter and the driver making the right decisions behind the wheel.

“It takes a lot of concentration and focus, but, really just forethought, just always thinking about your next move,” he explains. “It really is a high-speed chess match and you’re constantly weighing out your risk vs. reward and, fortunately, for me I’ve more often than not found myself in position to win these superspeedway races when it comes down to the end of the race. I’ve done it many a different ways. I’ve done it by being up front and being aggressive all race. I’ve done it by laying back and avoiding the big wrecks, and then being there at the end.

“I’ve found myself with opportunities to win these races multiple different ways, so I really think that it takes a lot of different key elements to all just kind of go your way on that given race.”

Even if a driver does everything right, they can watch it all go away in a matter of seconds due to the move of another competitor. Almirola experienced that in 2018, leading the field to the white flag, only to get turned on the backstretch by Austin Dillon a half a lap later. He admits being upset for the first couple days afterwards, but says his focus shifted immediately to the next race around the corner.

“That’s the one thing in life that is so apparent, and we’re always faced with that is that we can’t change the past,” he commented. “We can’t go back and change what happened yesterday or even five minutes ago. We just have to always look at the present and look ahead and look towards the next opportunity, so that’s been my mentality with our sport and kind of in life in general, and so, yeah, I was bummed out, for sure, to be that close to winning the Daytona 500 and it not happen, but I don’t think it kept me down whatsoever.”

Even though he was upset for those couple of hours, Almirola adds that he would rather be in contention and have that happen, than not being part of the conversation and quietly getting a top-10 finish.

“That’s really my mentality and the way I look at it is, to me,” he explained. “It means more to me to be running up front and have my sponsors on TV and all those things and be challenging to win the race and not go my way versus running a clean race off the back of the draft and being very conservative for the entire race and then missing all the wrecks and finishing seventh.

“Now, that’s certainly a better payday and a better points day, but at the end of the day we’re there to put on a show. We’re there to race and when I go to the Daytona 500 it’s the biggest race of the year and I want to win and I want to make sure I’m doing everything I can to put myself and our team in position to win that race.”