DAYTONA BEACH, Fla. – The mission was more than just winning the pole position for the Rolex 24 At Daytona.

The mission was points. Thirty-five of them, to be exact.

Ricky Taylor and Filipe Albuquerque claimed the Motul Pole Award by winning Sunday’s Rolex 24 Qualifying Race at Daytona International Speedway. Their No. 10 Wayne Taylor Racing Acura ARX-05 finished ahead of the No. 5 JDC-Miller MotorSports Cadillac DPi-V.R, giving WTR and its other co-drivers, Will Stevens and Alexander Rossi, the pole for the 60th running of the 24-hour race that starts Jan. 29.

This is the second year that the IMSA WeatherTech SportsCar Championship has awarded points for qualifying. Last year, the No. 31 Action Express Racing Cadillac DPi-V.R claimed the Daytona Prototype international (DPi) championship over WTR by 11 points – the same margin it gained in qualifying points during the course of the 2021 season.

“We need to start putting points in our pockets, but our main goal now is just to get the win at Daytona,” Albuquerque said. “That’s the main thing. We take it step by step because it’s way too early to think about the championship, but we can tell that it’s going to be really close.”

Winning the pole and the accompanying points wasn’t an easy accomplishment. Taylor in the No. 10 and Richard Westbrook in the No. 5 battled nose-to-tail for the final 25 minutes of the 100-minute race that ran caution-free. On the final lap, Westbrook spun trying to pass Taylor in Turn 1. He recovered to secure second place and a front-row start for the No. 5 car co-driven with Tristan Vautier, Loic Duval and Ben Keating.

The No. 10 Konica Minolta Acura started seventh in the seven-car DPi field after a penalty for a wing angle infraction during Saturday’s qualifying session. Within 30 minutes of Sunday’s race, the car was in the lead.

“The team doesn’t miss a beat,” Ricky Taylor said. “They’re always prepared for anything. They’re such a great group of guys. That’s what separates the great teams from the not-so-great teams. When you do have a bump or a mistake, everybody knows everybody is trying their best. We don’t blame anybody for being on the edge, and they do the same with us.”

After four more practice sessions Thursday and Friday, the 61-car field will take the green flag for the Rolex 24 at 1:40 p.m. ET Saturday. NBC’s live coverage begins at 1:30 p.m.

Keating and Mikkel Jensen wheeled the No. 52 PR1 Mathiasen Motorsports ORECA LMP2 07 to the Rolex 24 pole position in the Le Mans Prototype 2 (LMP2) class over the team’s No. 11 car co-driven by Steven Thomas and Jonathan Bomarito.

Keating overcame a slow start from the No. 1 starting position in class during Sunday’s qualifying race and lost the lead to Thomas. However, Keating rallied back and pulled away to win by 20.050 seconds.

“It wasn’t until we started passing GT cars that he got held up and gave me the opportunity to pass him,” said Keating, a co-driver for both the No. 5 Cadillac DPi and the No. 52 ORECA LMP2 in the Rolex 24. “Once I got around him, I was really able to manage the traffic very well and use it to my advantage over and over again. That’s initially what allowed me to build the gap.”

The No. 52 car, which Keating and Jensen will co-drive in the race with Scott Huffaker and Nicolas Lapierre, will start eighth overall in the race. Following the No. 11 car on the grid will be the No. 68 G-Drive Racing by APR ORECA co-driven by Rene Rast, Oliver Rasmussen Ed Jones and Francois Heriau. 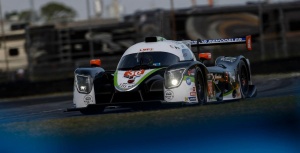 Josh Burdon and Jarett Andretti combined to lap the Le Mans Prototype 3 (LMP3) field and win the class qualifying race and earn the Motul Pole Award in the No. 36 Andretti Autosport Ligier JS P320 they co-drive with Rasmus Lindh and Gabby Chaves.

“Things happened to other competitors and we just happened to run the whole race and set the pace and get through traffic right,” said Andretti, son of the late John Andretti and cousin of Andretti Autosport principal Michael Andretti. “… The (LMP3) cars are not meant to go 24 hours. If you have a problem, you have to fight through the problem and get back on track as soon as possible. … Attrition and survival is really the name of the game in this class.”

“It all went to plan,” Burdon, Andretti’s co-driver, said. “It’s quite a new group they’ve assembled here. It shows we’re on the right track. We have the infrastructure and all the tools available. We have some little things to work on to be strong in the race, but overall, it’s a really good start and good momentum.”