“They Said What?” Road to Indy Edition

Throughout the Road to Indy season, there were quite a few of these moments. So it seems only fitting we take a glance back through the year at what was said.

“For me, IndyCar has always been part of my goals since I started racing in open-wheel. So I started in the F4 US Championship and then migrated up to F3. Then I always knew to really develop myself as a driver, racing in Europe was really good. So I went and competed in British F3 for two years, which was really was a good experience as you learn a lot of knowledge racing in Europe. Then the question always was to where to come back after that to try and get to IndyCar. With F3 being pretty much parallel to Indy Pro 2000, kind of marks a good point to come back and do Lights for this year. So just trying to prepare as much as possible for the road to IndyCar and Lights is the next step so here we are.” – Benjamin Pedersen

“There’s always pressure to perform. Every race has pressure to perform, mostly from myself putting pressure on myself to perform. The championship battle always comes down to the end so every race, you have to do your best. So ultimately, I need to focus on what I can control and not worry about that. Last weekend was tough in not being the fastest team, but knowing our history here, we’ve always been super strong so knowing that gives me a lot of confidence in knowing I have a good set-up to start on and should be strong throughout the weekend.” – Braden Eves

“I mean, I knew inside of myself that we could win. I know there was definitely some stuff that didn’t go our way in the middle of the season – partially, we had some struggles finding the mistake, I did a couple mistakes; we just had a rough time. But I knew when everything goes well, we were the quickest car, and I think it’s just keeping that mindset and keeping working at it. Whenever came across these problems we may have, we kind of just kept working at it and got through on the other side of it.” – Christian Rasmussen

“Well, what I really like about Road to Indy is how they’re all the different steps to that and you have the opportunity to get good at a championship and if you put forth the effort in, there’s a step there to move up. Being that I know I can put in the effort to do well each race weekend, I know if I succeed there’s a step higher I can go and if I do good in that, there’s even a step higher. That’s what I like about  it, and then through that process of getting a faster car progressively, you get the proper way of learning cars and I think that’s a very nice to have.” – Dylan Christie

“I think it’s time because last year, we had a lot of good results, and although the championship results don’t show how good we are, we were consistently running up front and I think it’s time to move up. Rather than stay there and try to win a championship, I think it’s better to go with the flow and move up.” – Jack William Miller

“For sure it’s my race craft. Obviously, I just came from karting so I’m used to a different style of racing. So for me, I had pace and speed, but what I couldn’t find is consistency in my race craft and making passes was a struggle for me. So by the end of the season, I started to figure that out and was starting to make my way through the field consistency. So that’s the biggest takeaway from that season for me.” – Josh Pierson

“Like you said, it’s a bit of a funny balance. It’s different having your teammate as your biggest rival for the championship, but also a guy that you want to work together with because you, as a team, want to beat the other teams. I think we’ve found a really good balance and one of the key factors is why we are quick because David and I are able to push to each other, push the team forward, and make everything as nice as possible. I think we’re going to see some close racing on track as well, but Indianapolis showed whoever is quicker in the day will get the pole and the win. I think it’ll be close as the season goes.” – Linus Lundqvist 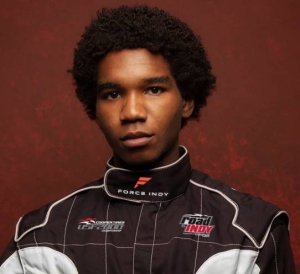 “I drove into the Lucas Oil School of Racing in 2016, and only did three weekends as we couldn’t afford to do more. What was really nice was coming into the last weekend, knowing I wasn’t going to drive anymore that year and the third weekend I was out racing, we came away and won the last race. It was a double header and we had troubles in the first race, but won the last race – which was really, really nice. So it was really good moment because it was special at the time. I actually got a double header win the weekend before that but to come back and show that I could win it again, and then have that be my last race that I did, it was great for my confidence and helped me preserving. It helped me find a way to keep my racing career going.” – Myles Rowe

“I think it was great for me. Obviously, pandemics are bad – they have affected so many people and we’ve lost so many lives so it’s awful. But for me, having the break and being able to take a step back and think about why I’m racing, why I’m doing what I’m doing has given me a lot to think about. I’ve been working so hard on the Road to Indy for the las five years, it was nice to take a year, a season and sit back and relax. I was able to do some other racing. I ended up racing in the European LeMan Series for a couple races, I raced in the Intercontential World Challenge race, and I learned a lot from endurance racing in driving different style cars and racing. I was able to sit back and think about what I was going to do when I got behind the wheel again, and when I was able to race, I learned a lot from those different experiences.” – Robert Megennis

“That’s a great question. I would say I look up to Oliver Askew a lot. I mean, he went through the Road to Indy program, raced for the same team that I was with in karting, and raced for Cape Motorsports in USF and he made it to IndyCar, and he won the Rolex 24 Hours – so I look up to him a lot.” – Thomas Nepveu