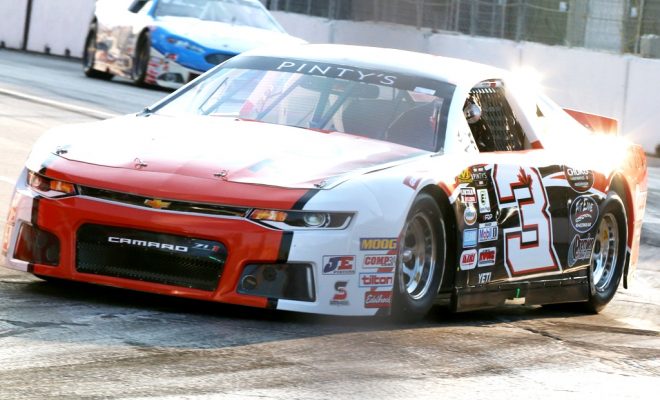 TORONTO, Ontario — Steadily making progress throughout the Pinty’s Grand Prix, Jason Hathaway was able to leave the streets of Toronto with a solid top-10 finish.

“It was a good run for us,” he told POPULAR SPEED. “A little bit of a momentum builder heading out west; we’ve had a couple rough weeks. A little rough out there on some of those restarts. It’s real hard in some of those passing zones, but I was getting everything I could on every restart and it just worked out for us that it was our day today to get a good finish.”

The weekend did not start off strongly, as Hathaway would only qualify the No. 3 Kubota/Choko/Premium Bulk Systems/Kugel Chevrolet in the 14th position for the 35 lap event.

“I thought we’d be a little bit better when we showed up here, but it took me a little truthfully to get back into the rhythm,” he admitted. “I haven’t been here in three years. I think the car was better than the driver for the little while. But we made some adjustments this morning and thought we had a good car going into the race.

“It was good. Got to race with a lot of good guys as at the end, we were with (Gary) Klutt and Jason White was real fast this weekend, as well as D.J. Kennington. We had a real good battle with Donald Theetge most of the day. I think everybody is still friends after it, so I think we’ll pack up and head out west and get on some ovals.”

Although normally known for his oval performances, the previous two events this year have ended early for Hathaway as a result of incidents on-track. Now with momentum on his side, it’d be no surprise to the No. 3 up front in Saskatoon.

“We have a real good oval program and it’s two races – double points you could say – at Saskatoon,” he said. “So hopefully we can have two good runs out there, and come back with the finishes that we expect to have. We’re gearing up. We have a strong team this year. We’ve just had a couple bad weeks that have put us behind.”